Parking at Tre Croci just outside of Cortina, we set out with the intention of doing the Sorapiss circuit over two days, completing the three via ferratas en route and bivvying at one of the remote bivouacs half way.  This did however require us to carry all our own water as the last available water source was Rifugio Vandelli 2 hours walk in from the road.

Despite leaving before 9am it was already scorching hot as we walking through the scrub and woodland on the way to the Rifugio. The route (and heat) reminded me of walking on the final few days of the GR20 and there was more than a bit of relief from us all when we arrived at the Rifugio and were able to top up our water bottles for the rest of the hike – being pleasantly surprised to find this was also free. 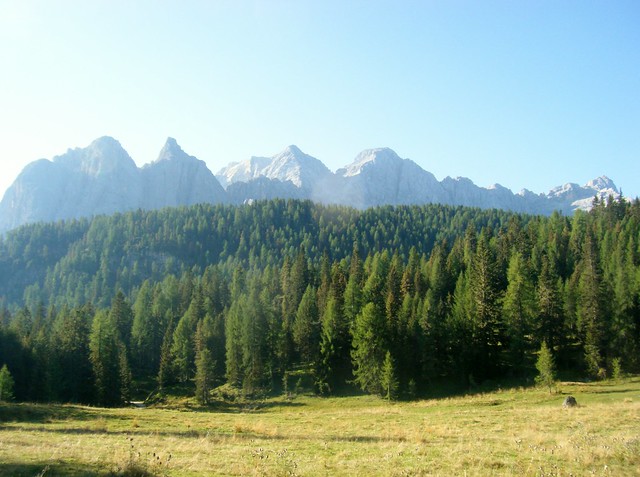 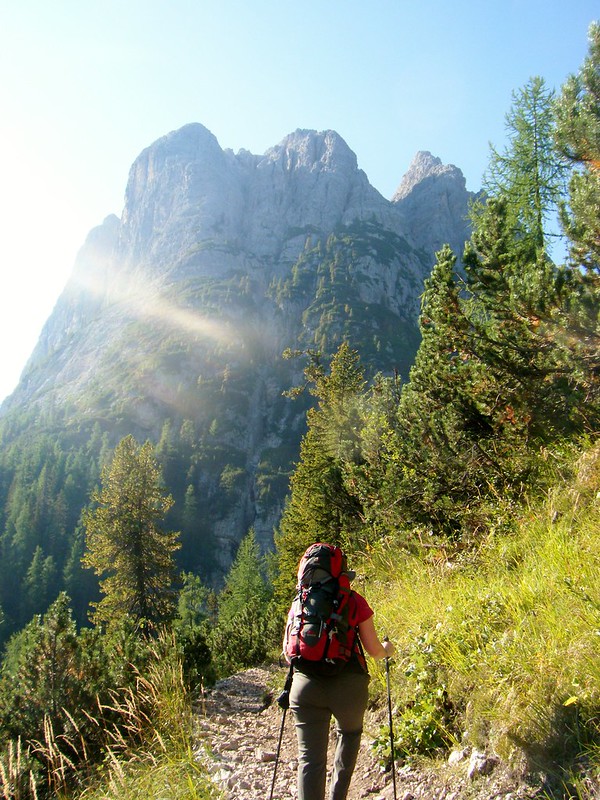 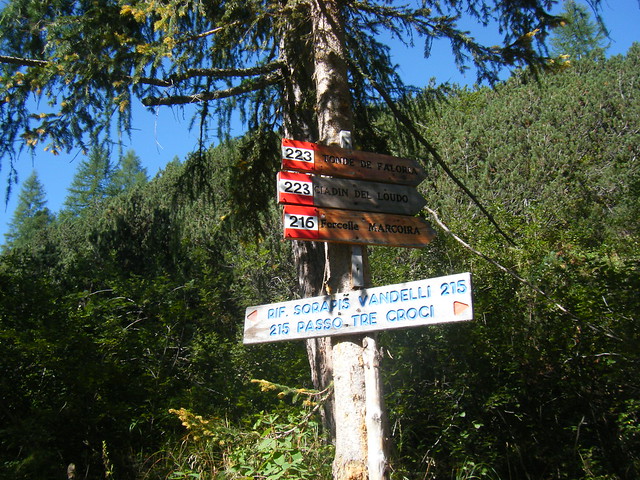 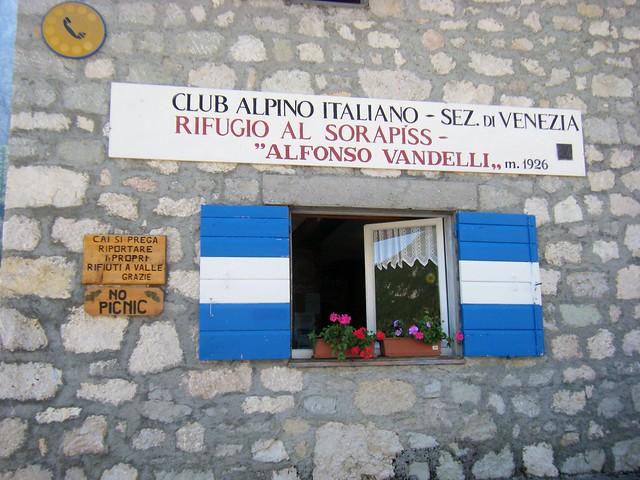 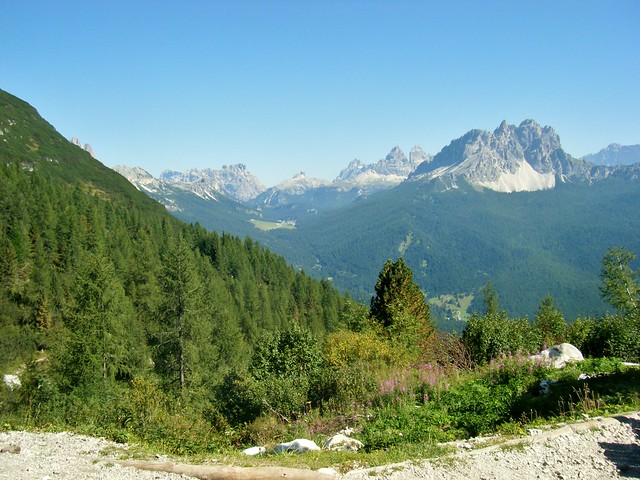 Lake Sorapiss is a popular beauty spot with day walkers most of whom have no intention of heading off to attempt the via ferratas. 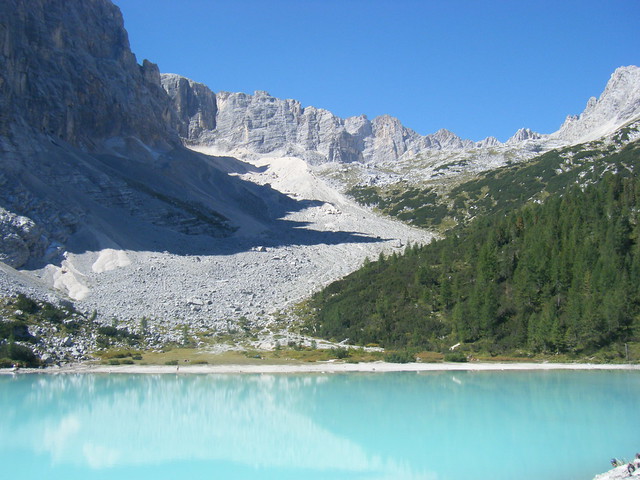 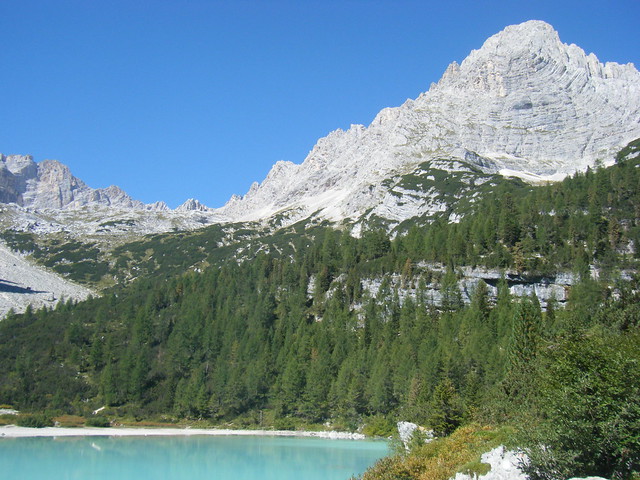 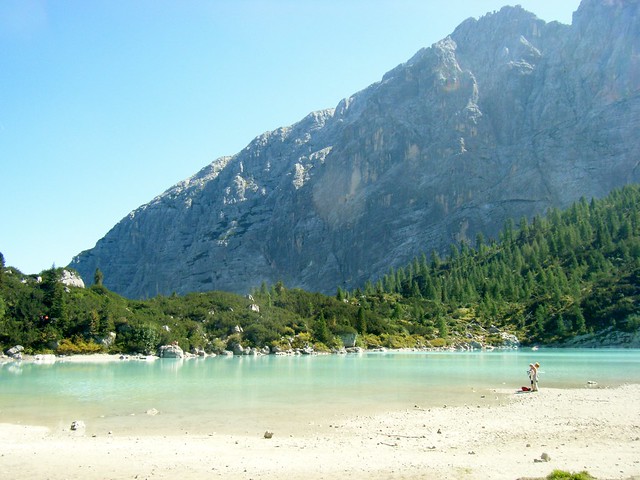 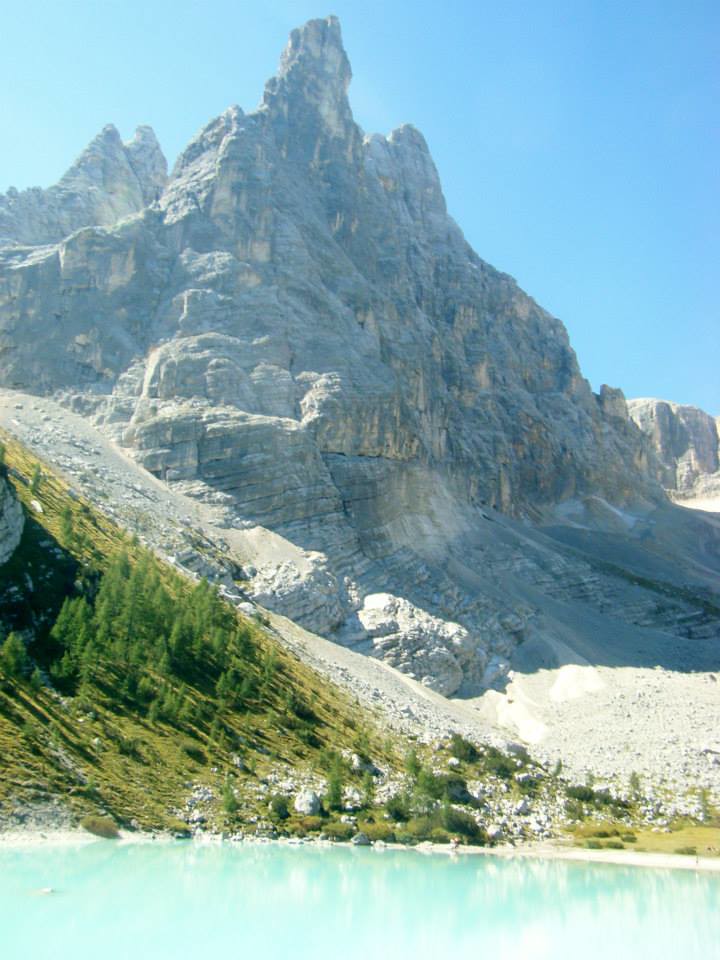 But as we headed up the endless scree slope in the midday sun it became clear we were unlikely to make it either. Now, I happen to be good at putting my head down and just getting on with it despite the misery, but I wasn’t confident about a grade 3 Via Ferrata with depleted energy. So with a suggestion of finding somewhere to bivvy for the night below the crags I happily went along with my friends – who frankly are much better climbers than me, so if they didn’t want to continue then I was just going to go along with them. 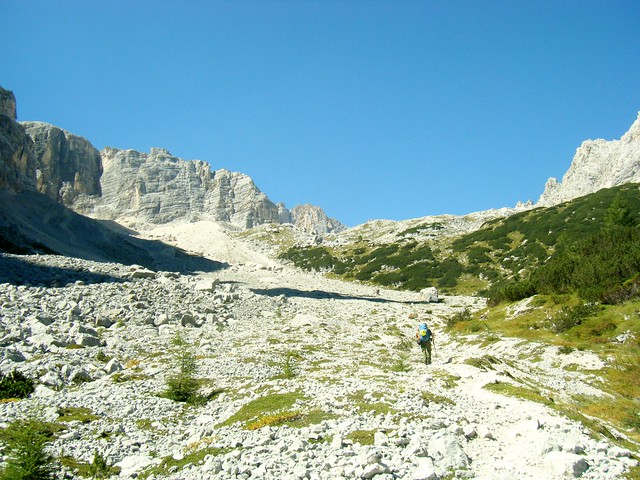 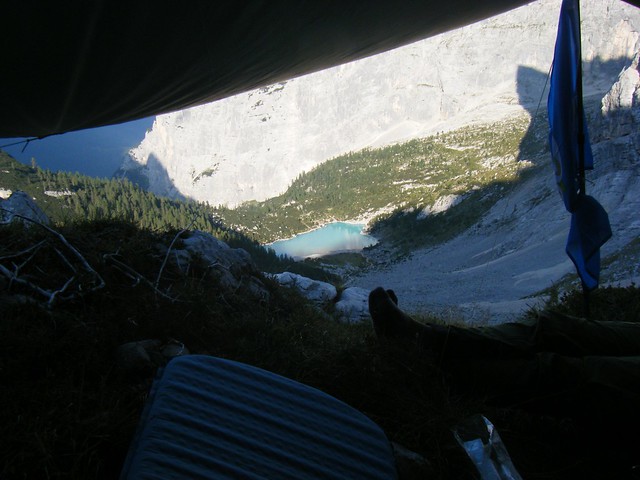 While we had a long afternoon of admiring the view – it was certainly worth it to bivvy out in such a beautiful location,  although the sound of rock and ice falling from the glacier above was a bit un-nerving in the middle of the night, as was the full moon passing overhead. And while it wasn’t the comfiest bivvy spot for three people to share, it was worth it for the sunrise. 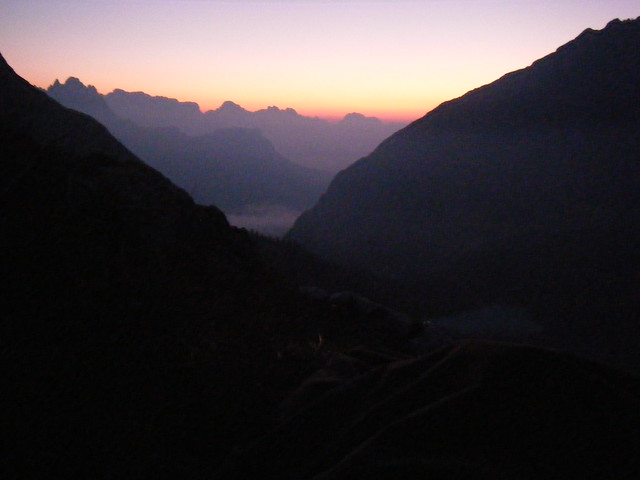 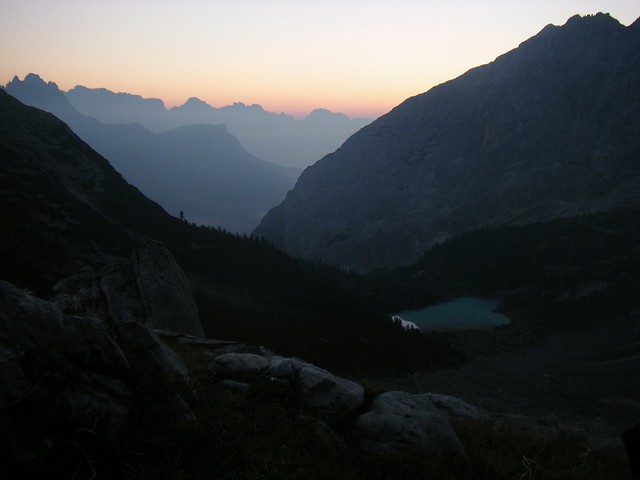 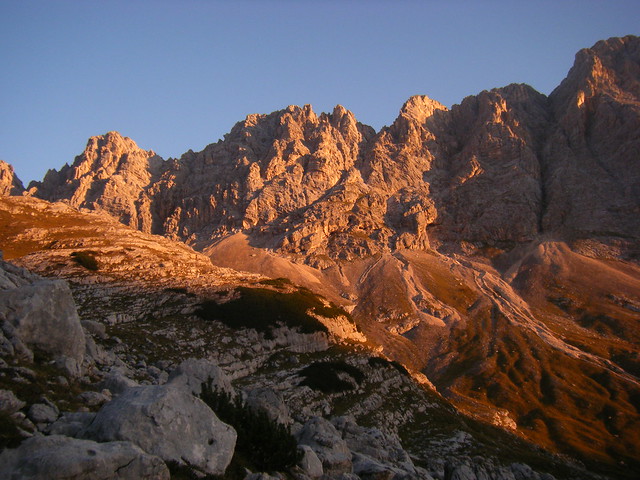 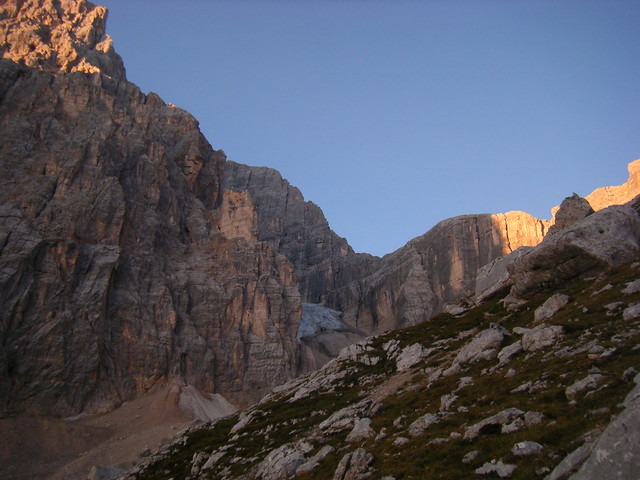 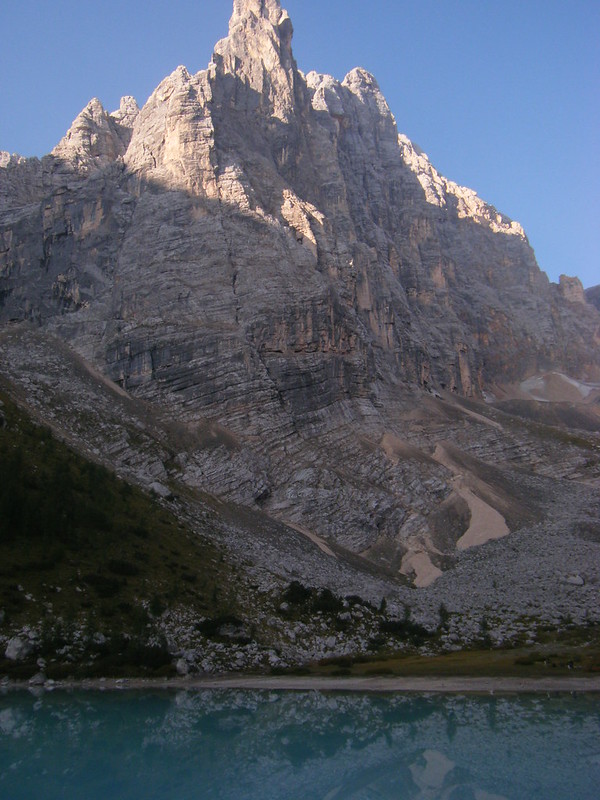 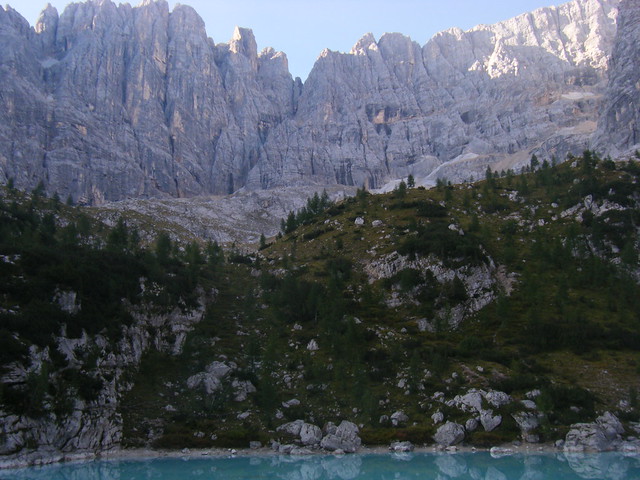 One Reply to “Bivvying on the Sorapiss Circuit”