Having woken with headache from a cold I acquired in Kathmandu I needed a good dose of decongestants this morning before we headed off. I’m glad I’ve been drinking lots of fluid so its not an altitude headache.

We left Chutanga at 8.30am and slowly headed up the mountain side, stopping at the huts we went to yesterday. We’d been given packed lunches today- boiled eggs, Tibetan bread, biscuits and chocolate – so since we were at 4000m I made sure I stuffed some food in, anticipating little chance to as we headed higher. 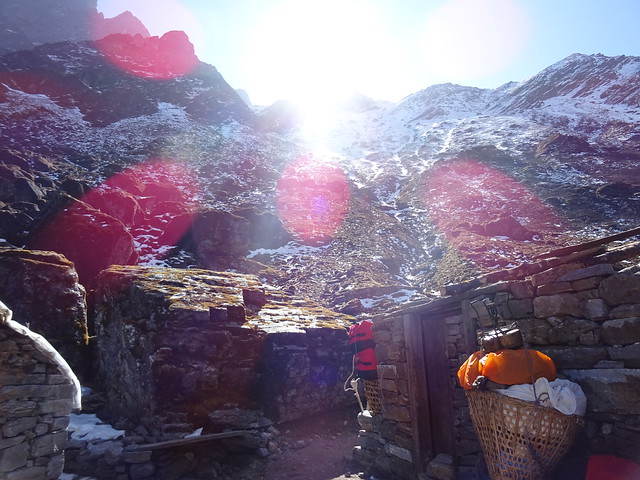 While we had been sat in the sunshine enjoying food and drinks, the route ahead was covered in snow and ice. So with ice axes out, helmets and spider crampons on we headed up the route where our climbing Sherpas Thile and Pembe had been cutting steps in the ice. 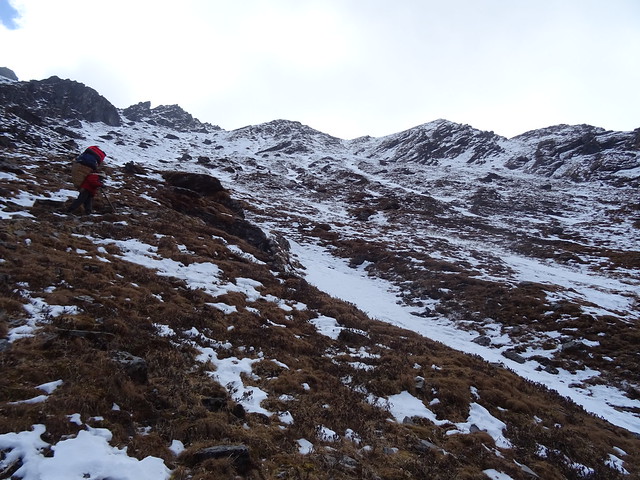 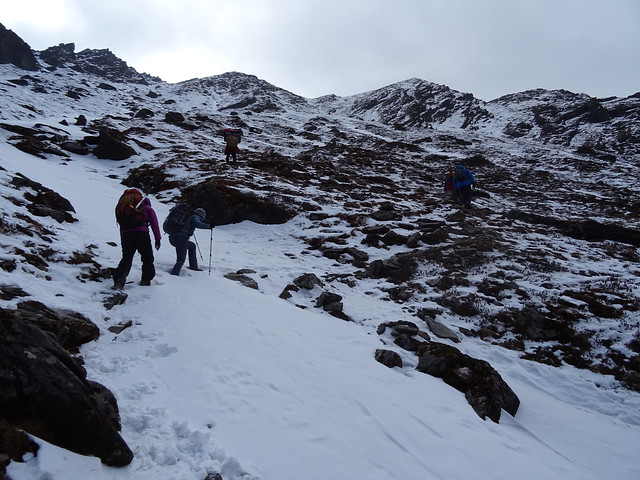 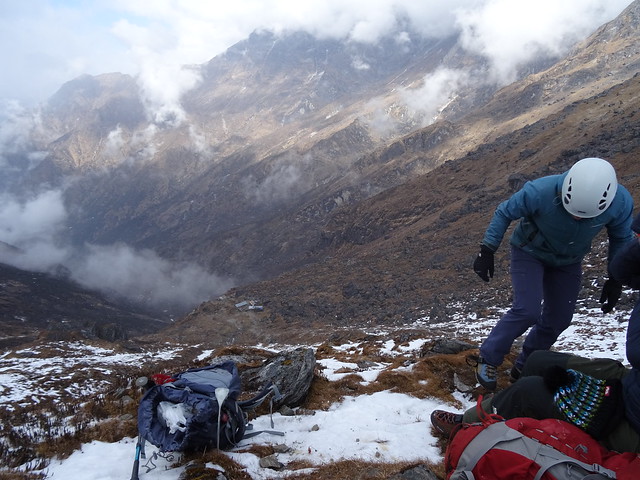 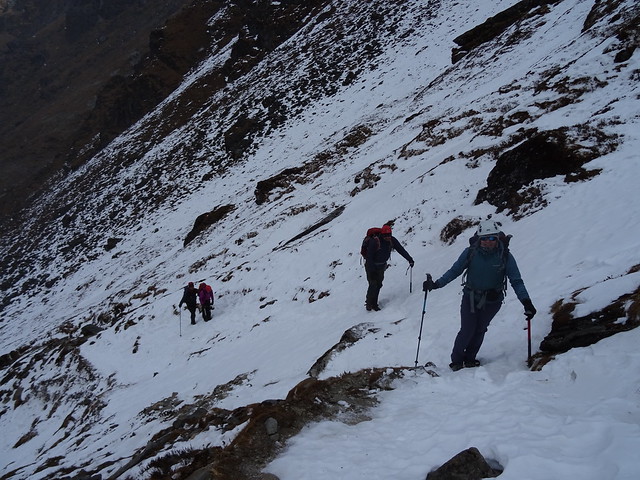 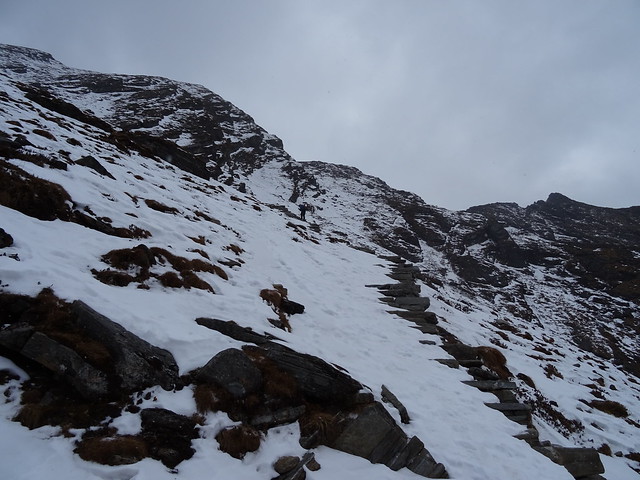 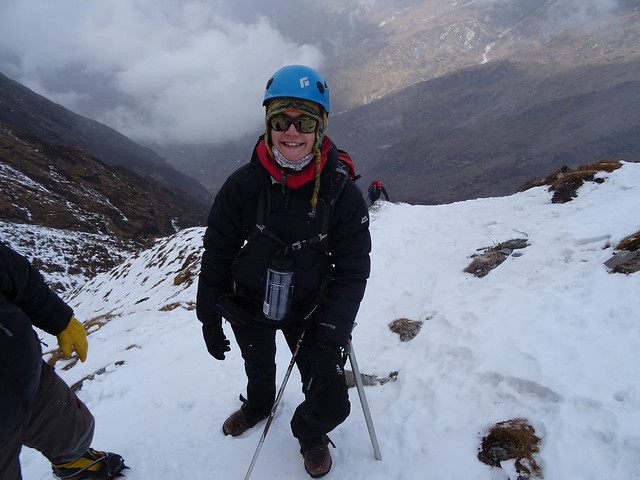 Whilst it was steep going it reminded me of a good day out in Scotland in the snow and sunshine, more so when it then started to snow as we got closer to the top of the Zatrwa Og – the first pass of the Kalo Himal ridge between the Khumbu and the Hinku valley. 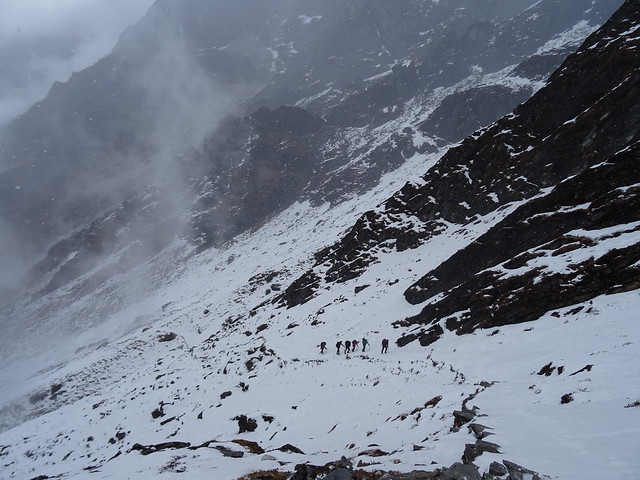 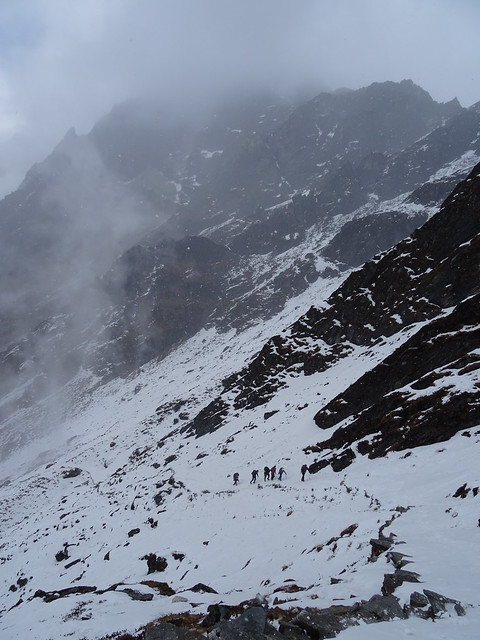 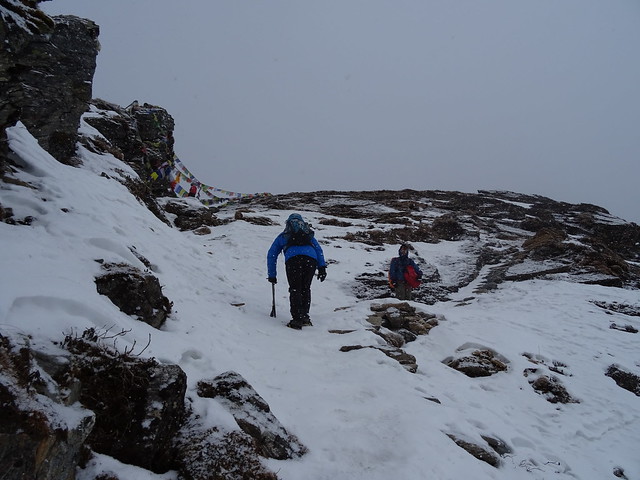 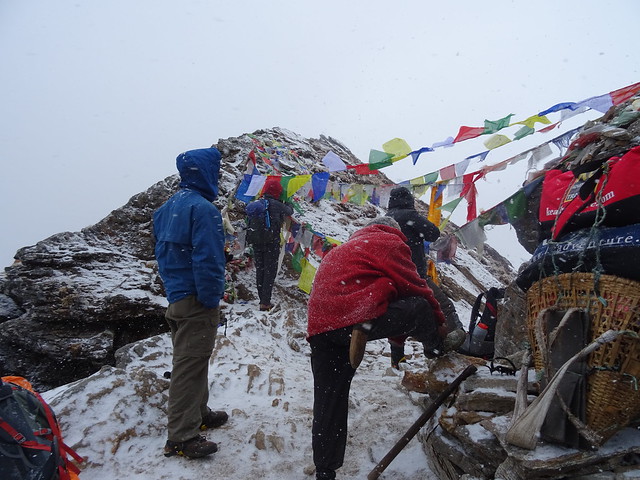 It hasn’t really stopped snowing since. Once I reached the prayer flags at the Zatrwa Og I could certainly feel the effects of altitude, making progress slow. So while we had reached the Zatrwa Og at about 1.30pm it was 3pm before we traversed around the mountain top to the final high point of the Zatrwa La. Slow due to the wind and poor visibility in the snow, and not helped by the altitude. In the persistent snow our group split in two at different paces and while I was in the front group it was still painfully slow. 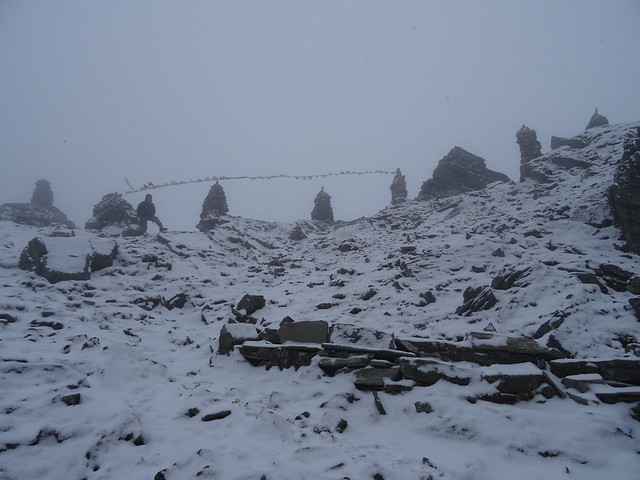 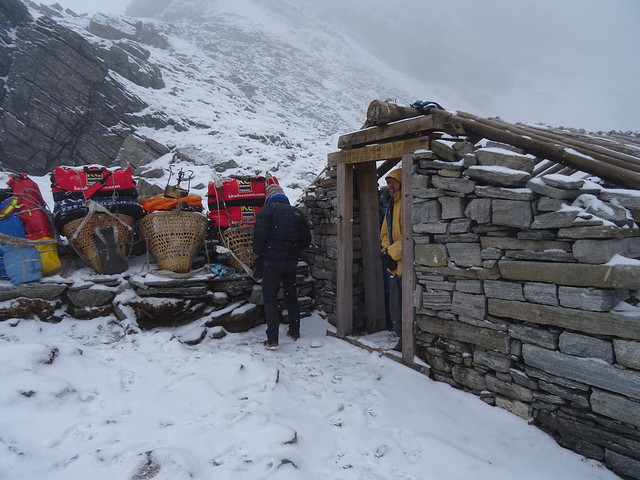 It would have been nice to celebrate reaching the Zatrwa La top at 4600m but it was freezing (my water bottle was completely frozen!), and it was preferable to keep moving to descend to Tuli Kharka lodge at 4320m – making it there for 4.15pm. 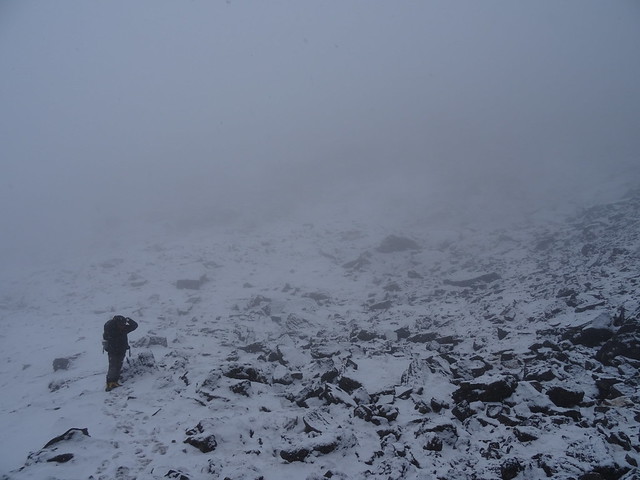 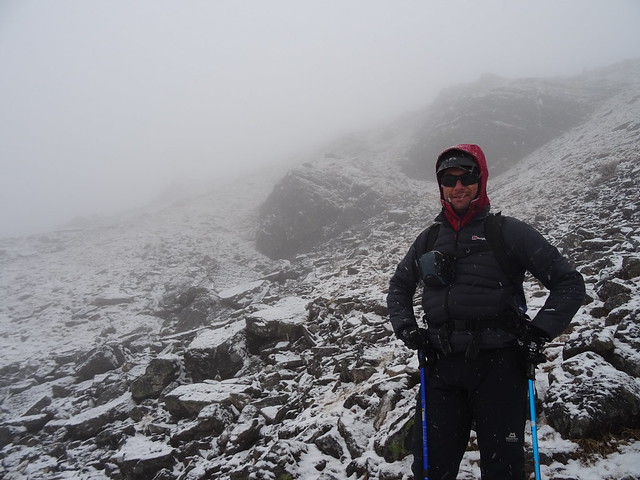 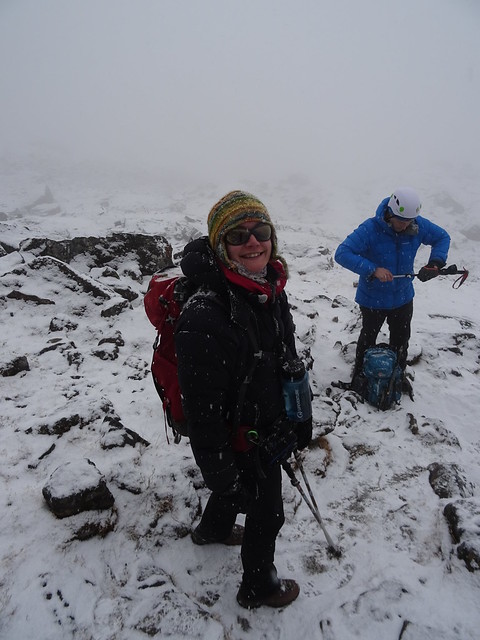 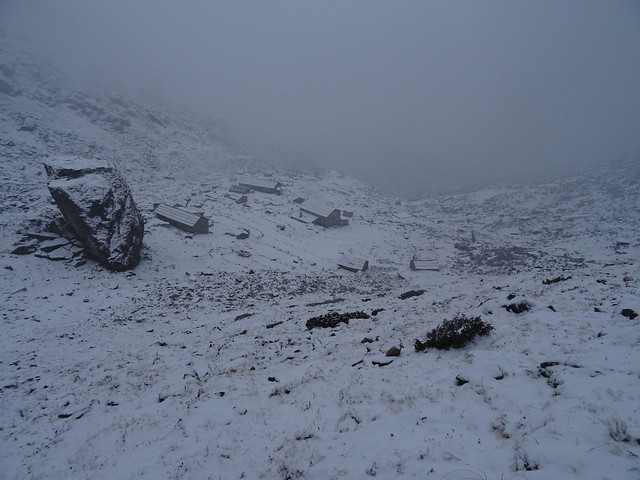 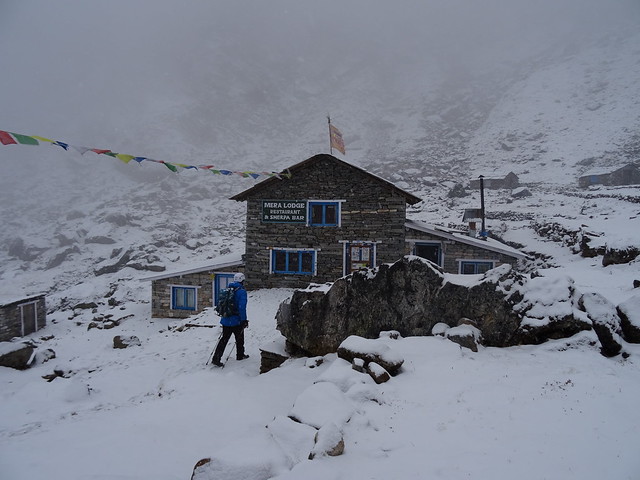 After the cold and snow today it was good that our porters joined us in front of the stove fire – they deserved it so much for battling on with no complaints despite most of them having only trainers on today and little warm clothing. I would not have survived today in their kit, but like heroes they get on with carrying heavy loads without protests.