It was freezing last night and while drinking 4 litres of water a day is good to prevent altitude sickness, the downside is numerous trips to the loo in the night. I’ve yet to risk using a pee bottle – it just seems potentially too messy for girls, especially when I’m using a borrowed sleeping bag. And frankly by the time I’ve psyched myself up to leave my sleeping bag, I might as well head outdoors. It was freezing – clear skies full of stars resulted in the water trough for flushing the loo being solid ice.

When morning finally came around I was surprised to find the bottle I was hugging was still full of warm water. I was toasty in my sleeping bag, the downside being getting out for breakfast.

We left Kathmandu 6 days ago. As it is out of season the lodges do not have showers or hot water available for washing; unless we request it and wait for the team to boil it over a fire to give us little bowls for washing our faces and hands.

As you can imagine my hair is already disgusting and I don’t mind admitting to wearing the same base layers since we left Lukla. Did I mention it’s freezing? I’m not getting completely undressed for bed! So I’m well on the way to stinking too – thank god for merino the smell shouldn’t appear too soon. No one has seen my hair anyway since Lukla since I have had a woolly hat on my head pretty much continuously. I don’t mind roughing it.

After pancakes and lots of hot tea for breakfast we set off through the cold mist to head for Tagnag, where we will spend 2 nights to allow us to acclimatise. 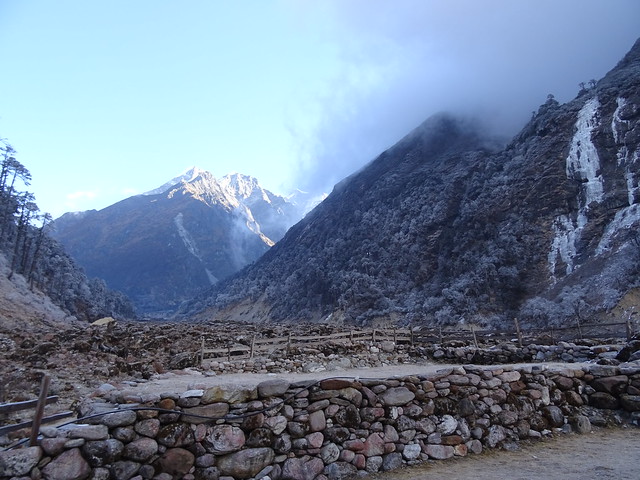 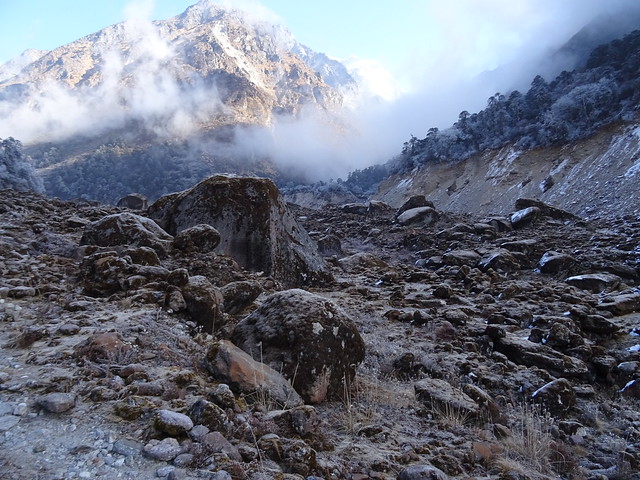 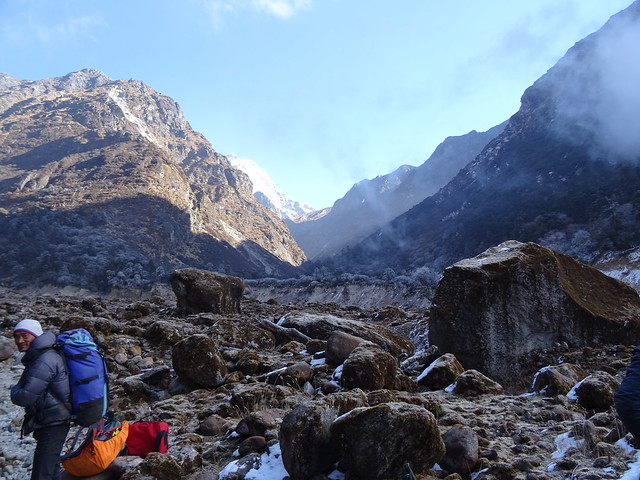 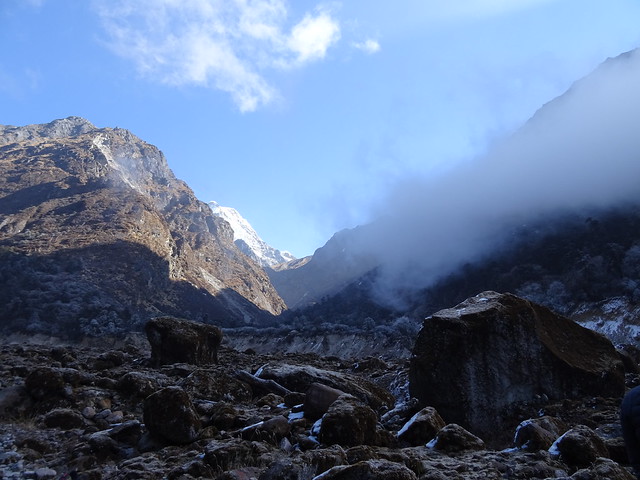 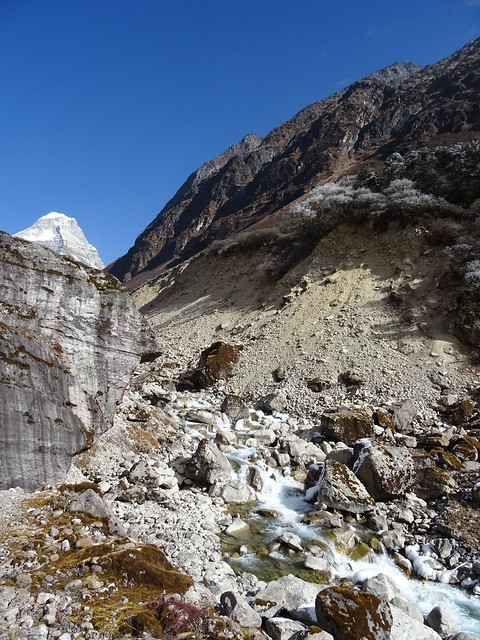 The path up the river remained rocky from the debris washed down from the flood in the 90’s, so we spent the morning rock-hopping. At least it’s not a steep ascent up to Tagnag, though we did climb 800m over the day. The upper Hinku valley is completely desolate but amazing, with the mountains of the Kusum Kanguru and Peak 43 looking down on us. 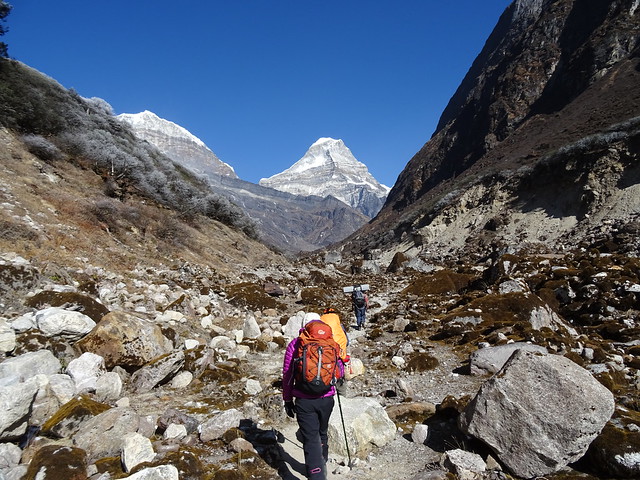 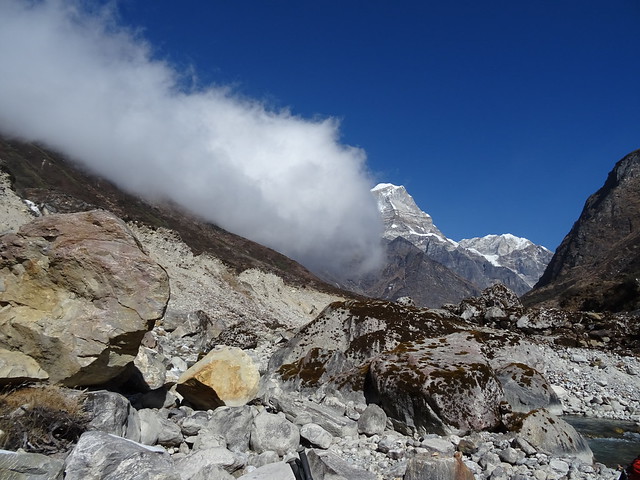 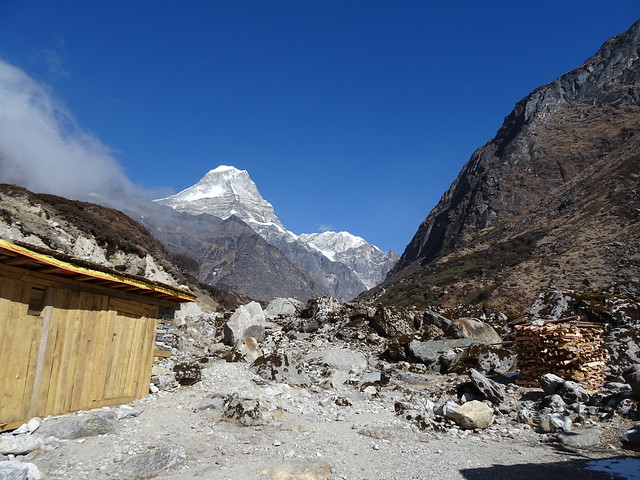 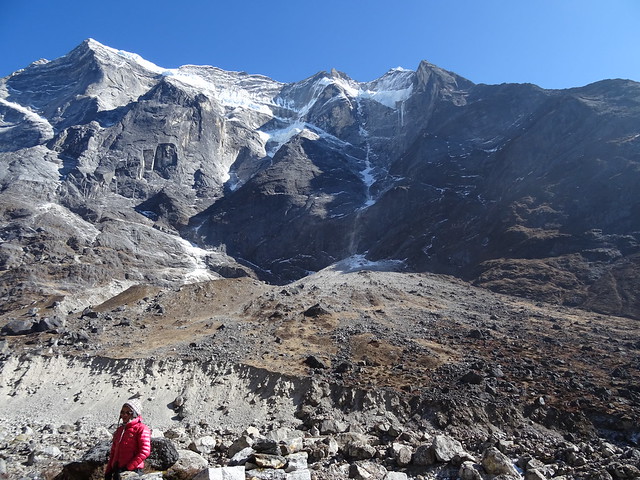 Around lunchtime the mist lifted and while it remains cold and windy we were treated to sunshine as we stopped for lunch at the little gompa built into the rocks. 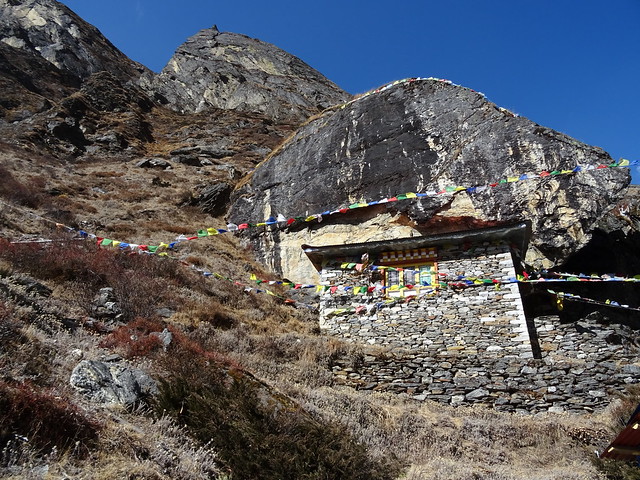 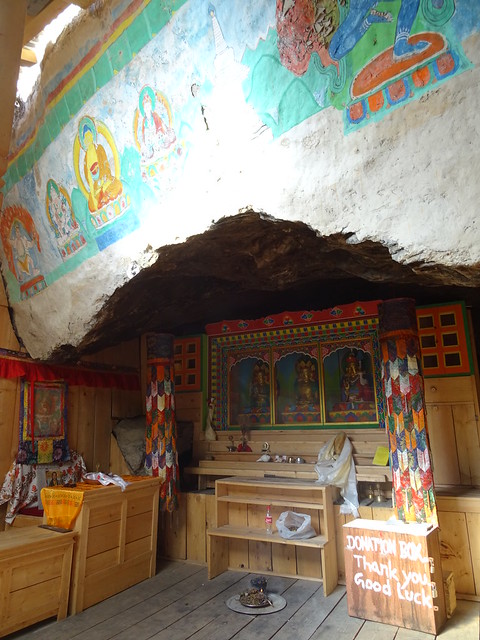 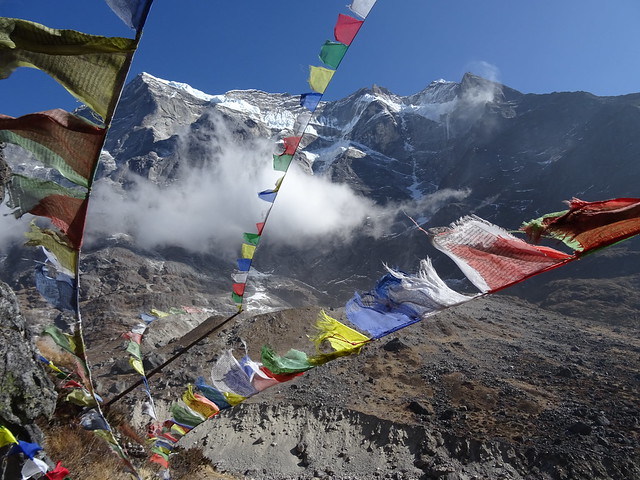 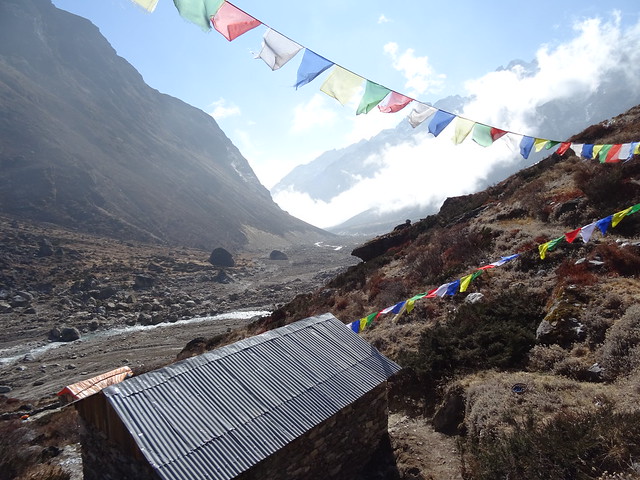 The gompa or hillside temple is apparently managed by a lama in the busy season who lives in the adjacent building. In such an isolated spot I can understand why he isn’t there all year around. There’s no nearby community for him to serve. Thankfully our Sirdar Phenden is able to open the gompa for us to have a look inside and the team burn juniper as a blessing to wish us good luck.

Phenden tells us that the Buddhist icons on display were found in a ruined village much further up the valley before being moved to the gompa when it was created 200 years ago. After a long break we continued up the valley for another hour or so to reach Tagnag – another isolated lodge at 4350m. There’s a cluster of lodges here, but like the other places we’ve walked through we’re the only ones here so only one is open. The nicest one in my opinion – the toilet isn’t too far to walk in the night.

We arrived at Tagnag at 2.30pm and had a bowl of hot soup to warm us up, since then we’ve sat around chatting and drinking tea. Had more soup and momos for tea tonight, and a bowl of custard with a biscuit which seems like a real treat. 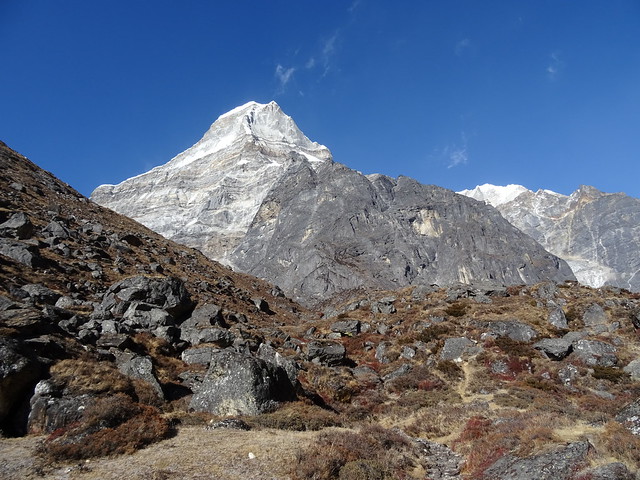 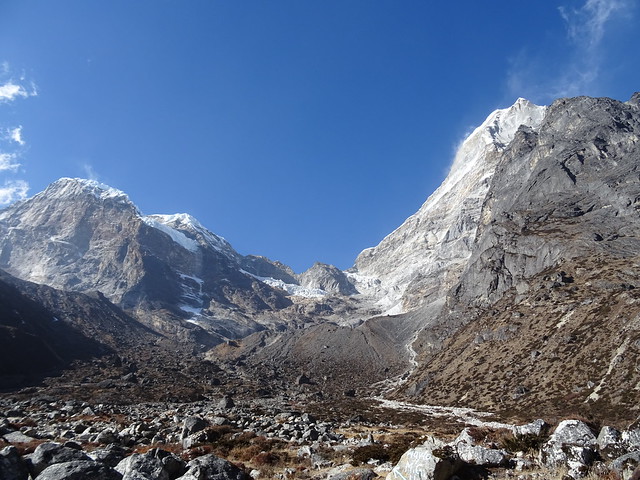 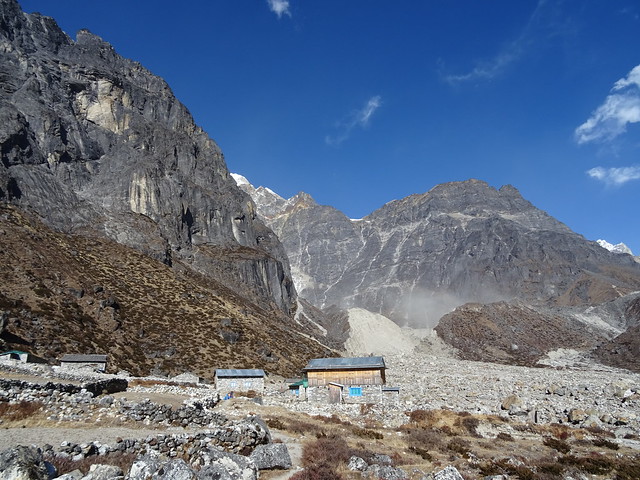 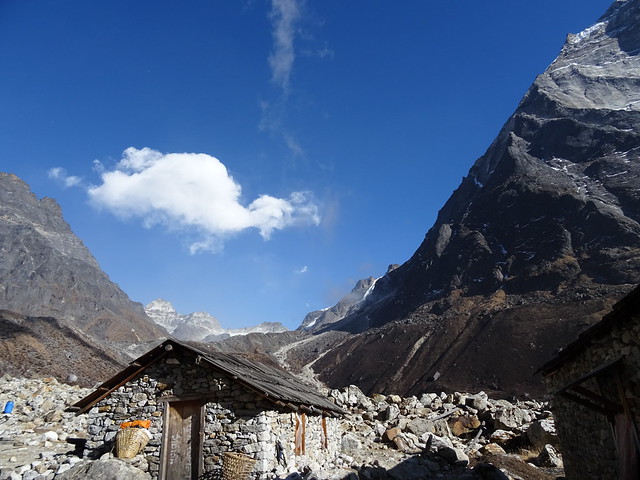 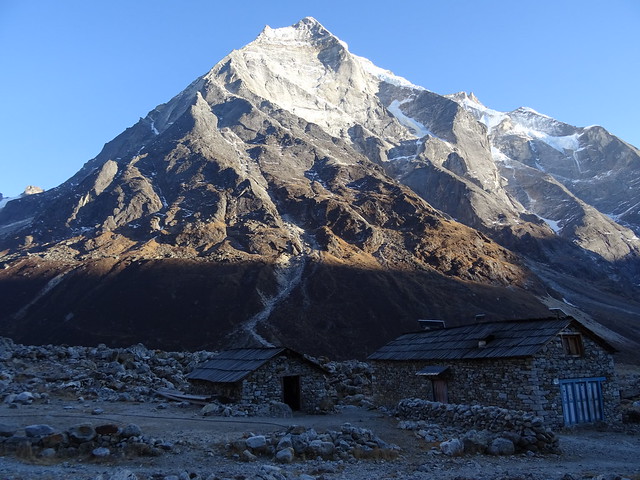 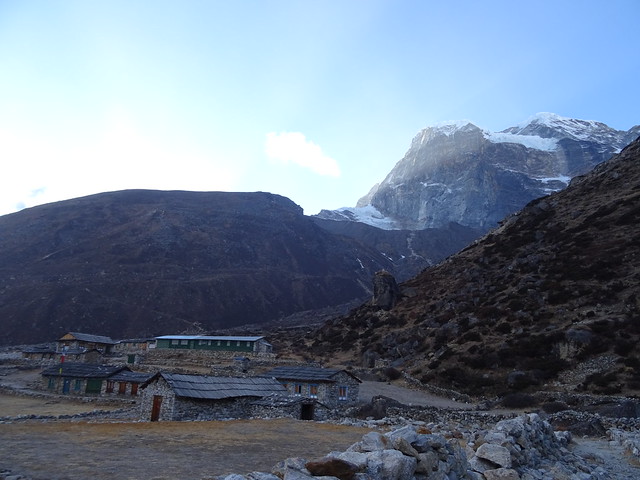 Its so cold outside the porters have joined us for tea, though its clear there’s a hierarchy, as Phenden our Sirdar is in the kitchen near the stove with the lodge owner while the rest of the team huddle around the small stove in the dining area. We are planning to stay here for one more night to acclimatise. 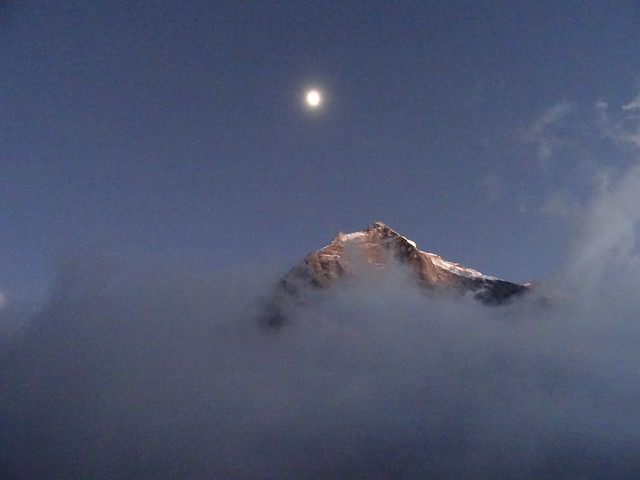