So much has happened in the past eight years since I last stood on Sgorr Bahn in Glencoe. Everything it seems has changed.
I last visited here in 2008 using my parents for transport so I could get in some quality mountain days for my log book. It was raining hard, hailing, and being a lot less fit than I am now I bailed at Sgorr Bahn worried I wouldn’t make it to the Munro summit of Sgorr Dhearg on the mountain range of Beinn a Bheithir, before the weather turned truly awful. As it happened it didn’t and as I got back to Ballachulish it brightened and I was left disappointed at not being braver and bolder.

That year marked a watershed for me, as I bought my own home and eventually changed jobs to a new city. Both things ultimately changing me gradually into who I am today.
Now I am no longer bothered that my academic career didn’t lead me to a PhD as I’d wanted initially. Now I am lucky enough to have a well paid job working for an organisation that changes people’s lives (even if my own job is a mind numbing array of spreadsheets and contract negotiations). Now I’m a home owner and single.
Everything has changed.

This wednesday I set off from Ballachulish to tackle Beinn a Bheithir in winter, making the most of the fabulous weather and appropriate avalanche report to allow me to do Schoolhouse arête.

From the village this looks like a scary route and last time I was here I wasn’t convinced it was walkable at least not wise to try alone, but I wasn’t the confident person I am today.
Schoolhouse arête is actually mostly walking even in winter, but there are two sections with a few snowy rock steps which depending on the snow can make it a grade 1 or 2 scramble. The fact I managed it despite the deep powder snow suggests today it’s probably a grade 1. 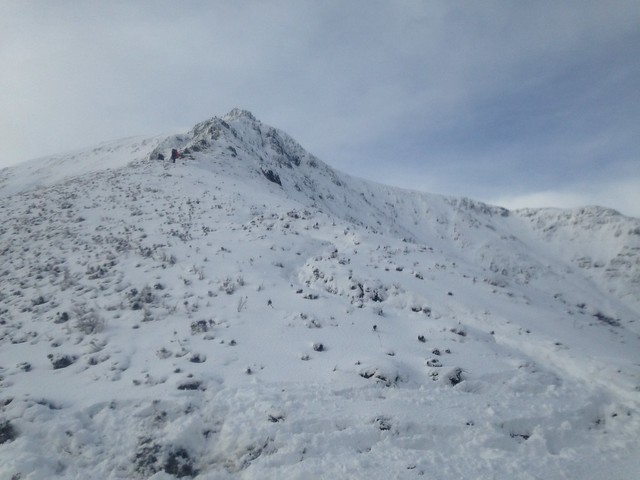 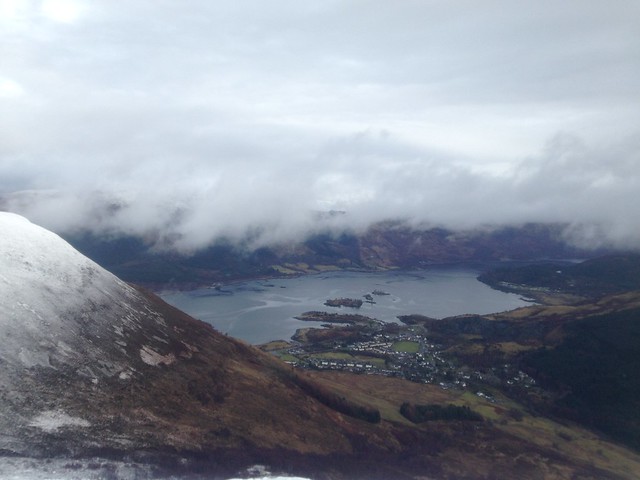 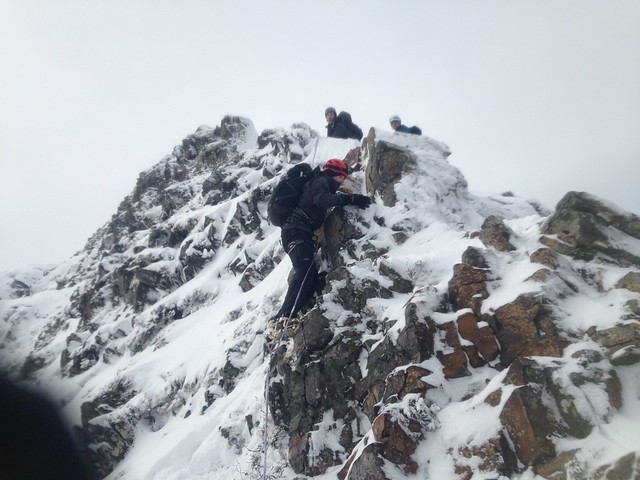 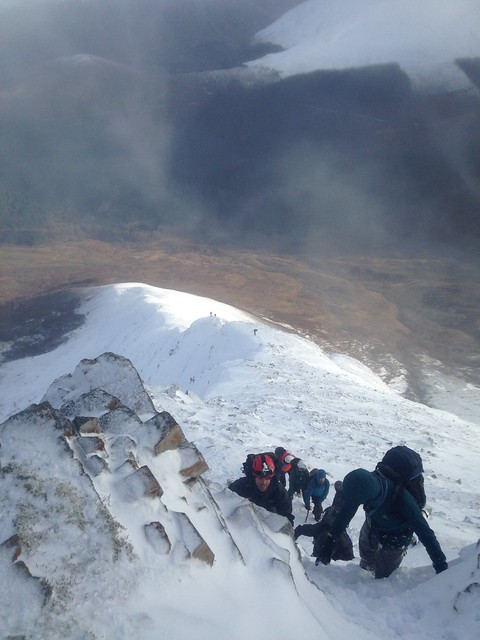 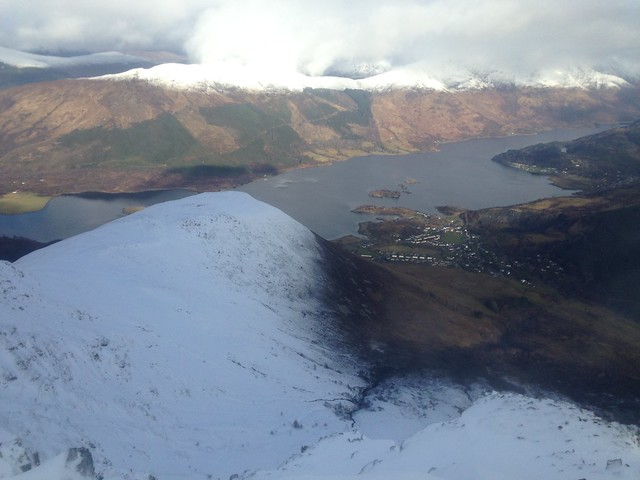 As I got to the top of the ridge and onto Sgorr Dhearg the wind picked up and despite goggles and loads of layers, carrying on do both Munros didn’t seem wise – it was also getting late. In summer this would no longer bother me, my confidence is now only impeded by my speed in winter and lack of daylight. And it was a strong wind. 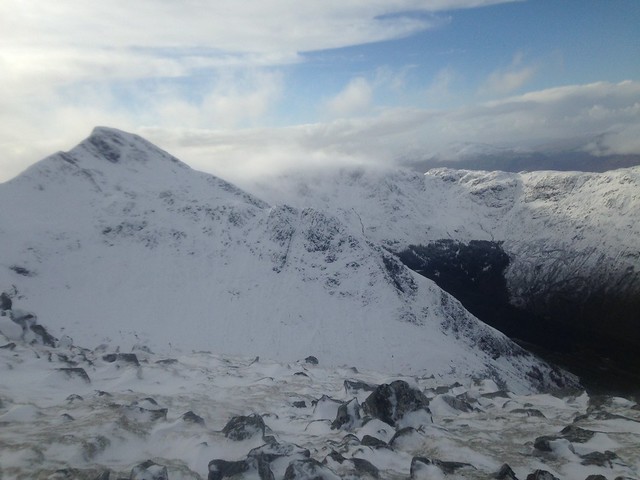 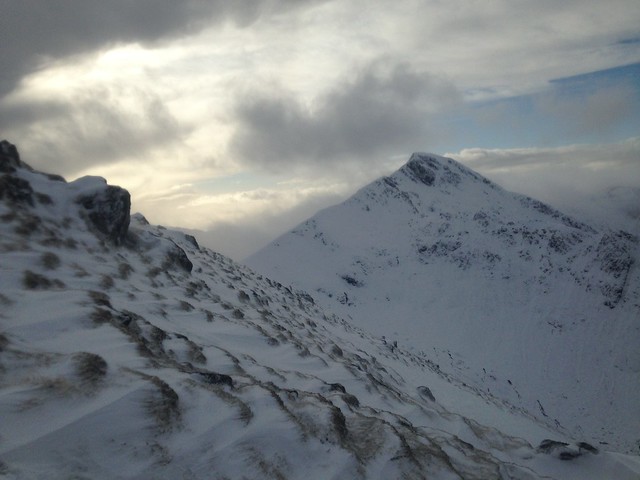 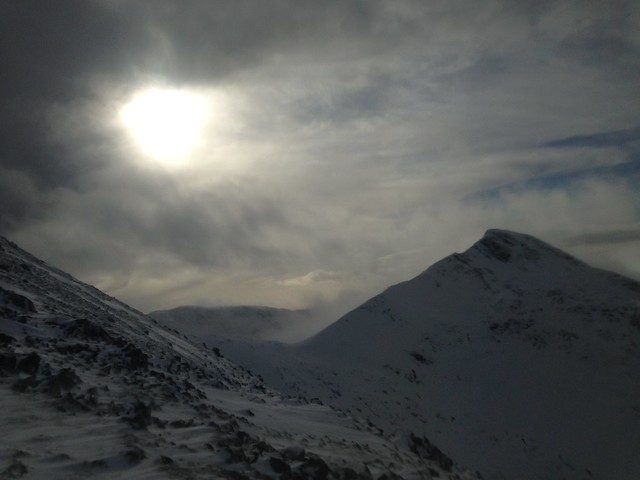 So for a second time I failed to summit Sgorr Dhonuill the second Munro in the range, and headed down the ridge that eight years ago I’d wanted to reach but instead retreated in the rain. But this time I’m not disappointed.

Perhaps because I’m having a truly amazing week in Scotland in winter and managing to get some epic days walking in. I feel confident about my abilities, about route choices and weather and navigation. And perhaps because I’d managed a route that I’d previously been worried about in summer and yet I’ve done it in deep fresh snow.

Over the last 12 months I’ve been edging towards doing more and more adventures and now it feels like something which shouldn’t be just a couple of big trips a year and a few weeks camping. It feels like ‘tinkadventures’ is actually who I am and not just a means of depicting myself. Social media allows people the ability to portray themselves as cool and adventurous without actually doing very much. I don’t want that.

When I passed my summer ML six years ago I flirted with the idea of jacking in my job and living the student life all over again, but forever, as an outdoor instructor. At the time life got in the way and I settled for suburbia. Whilst I’m not sure I want to commit to that lifestyle now as I want the big trips overseas that my current job affords me, I do want to push myself further. Being single I now have the freedom of time and this has allowed me to push myself further than I ever thought possible. And in doing so it has made me a more confident person and more daring. So much so I’m not sure I’ve tried anything properly outside my comfort zone this week – although its been fun.

I might not want to jack in the life I have completely but now the freedom of time allows me to flirt with the old dream again. Last year I embarked on much more outdoor freelance work. This year, stood in a crosswind with spin drift blowing in my eyes, snot trailing from my nose and yet smiling, I decided I want to have a go at working towards my winter ML. I know it’s going to take me ages, and I deep down I know I’ll probably never do the assessment – I live in the wrong part of the country to make it worth my while and I’ll probably never give up my day job that allows me to travel overseas for one that I can only afford to house share. But then I do work for a charity thats always teetering on the brink, so it’s probably wise to have a plan B to fall back on! So in that moment I decided to register for the award. And feeling so confident in my abilities now I might also have to add winter climbing to the bucket list!

Sgorr Bahn might not be a Munro but it reflects how much I’ve changed and where I want to go next. I’ve also decided I’m now saving Sgorr Dhonuill as my last munro since I feel it means something more to me than another one on the ticklist.