The snow was like slush and the rock beneath like sand, not reassuring as I climbed the rockface trying to find a secure crack to stick my axe in, to pull me up.

There hadn’t been good conditions for alpine routes the week we were in Chamonix so being able to get onto anything felt like a bonus. The Pointe Lachenal Traverse is relatively easy to access via the Midi cable car and the snow arête descent. There was some trepidation as we headed up the cable car with the visibility being poor and it being considerable colder and windier than it had been for the last few days. At least it had stopped raining for long enough so we could get high.

I led the descent down the snow arête noting a lot more fresh snow than when we’d climbed a few days before on the Cosmiques Arete. As we descended down to the glacier the visibility dropped to about 100m, and at this point we were also breaking trail with the only other climbers already out heading for the Cosmiques.

It felt a lot like a wintery day in Scotland, minus the horizontal hail against my face. 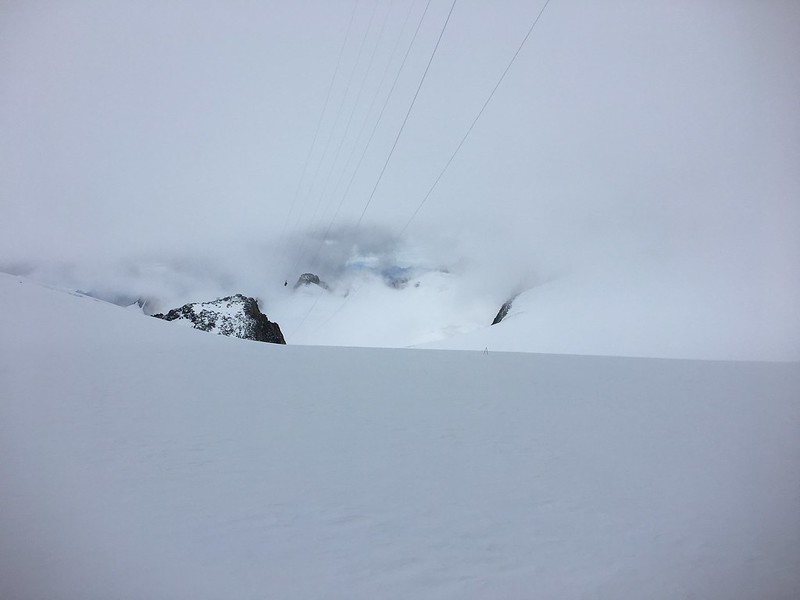 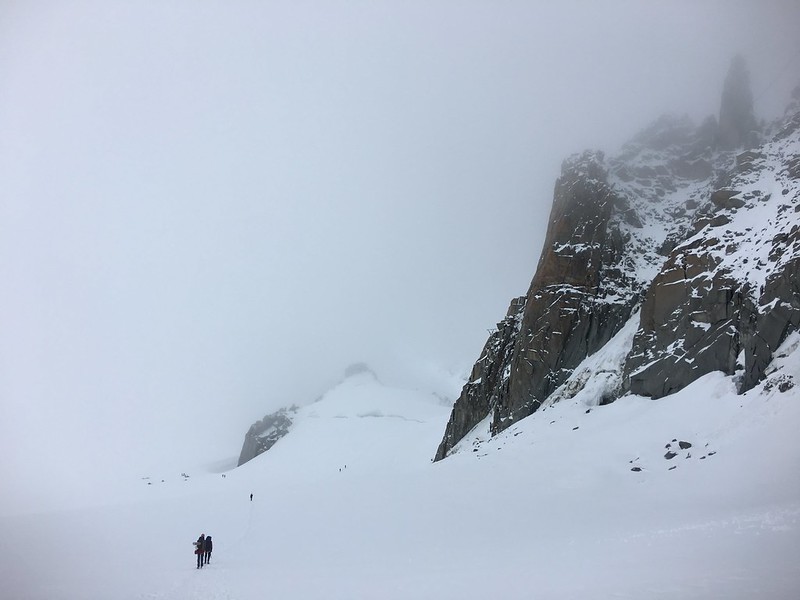 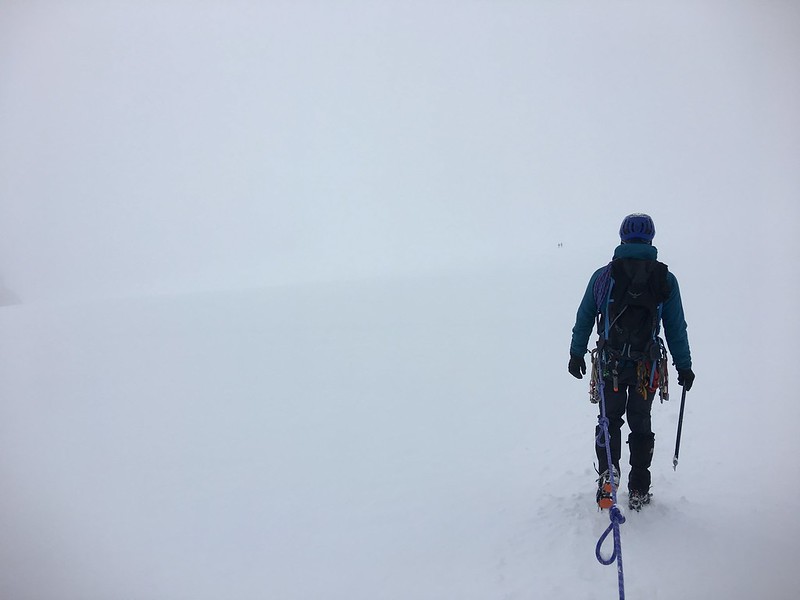 As we headed across the blank space, being mindful of the glacier beneath our feet, we met two young alpinists looking for a route. With no map and little concept of how far across the glacier they had to descend to get to their desired climb, we made sure they had at least a good photograph of our map before they headed off into the fog.

At least the cloud lifted as we got near Pointe Lachenal so we had a good view of the snow conditions on the route. Bare ice in parts. Due to the strong wind that had accompanied the last few days snow and rain, and the extremely warm temperatures that had preceded that, the ascent onto the ridge had been completely scoured and had become ice with the constant freeze/thaw.

Whilst the ascent onto Pointe Lachenal isn’t difficult we had to ensure we were properly protected, so ice screws were deployed. This was the advantage of moving as a pair as we could do this with speed. Unfortunately at this point my partner lost his sunglasses which merry whizzed off down the ice into the abyss below. For once we then started praying the sun didn’t come out otherwise he would be quickly snowblind. We climbed the bulge of snow on the left of the image below, and the route continues right across over the first two rock points to descend the snow on the right. 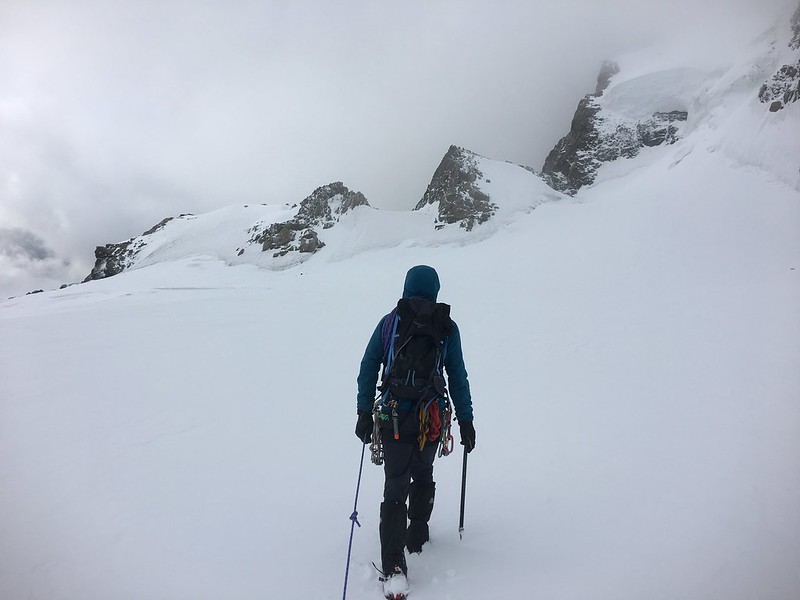 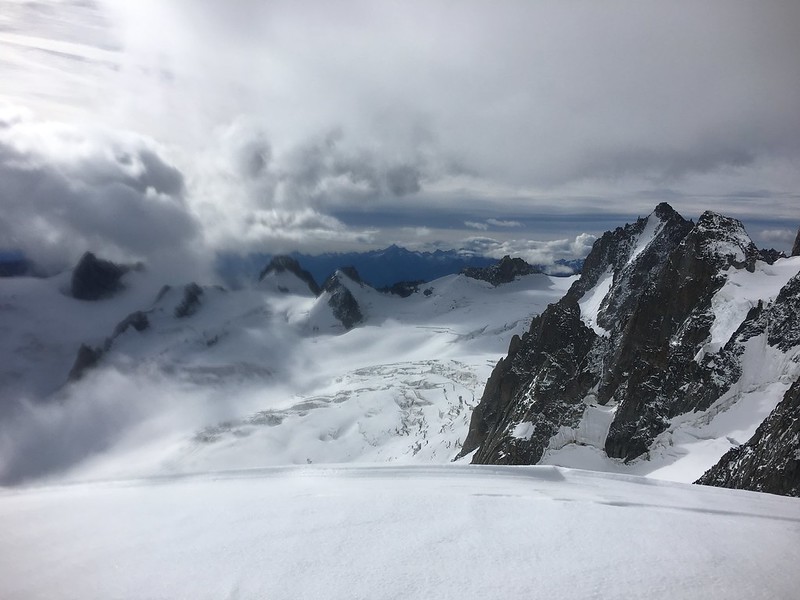 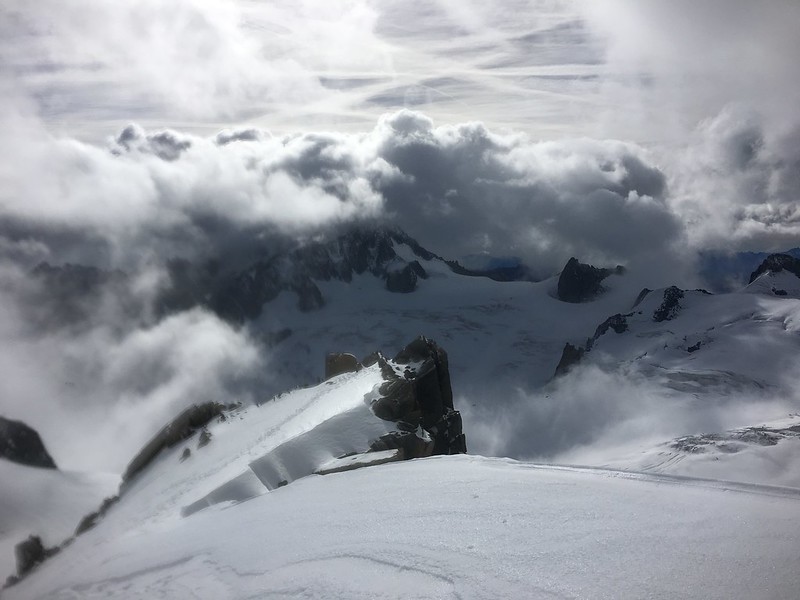 The ridge is fairly wide with only one awkward step round a rock before you reach the abseil point half way along the route. 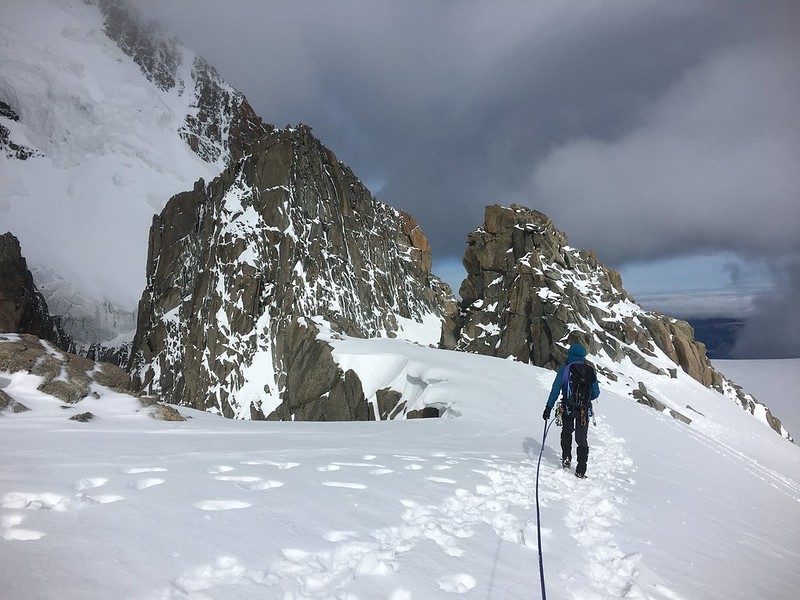 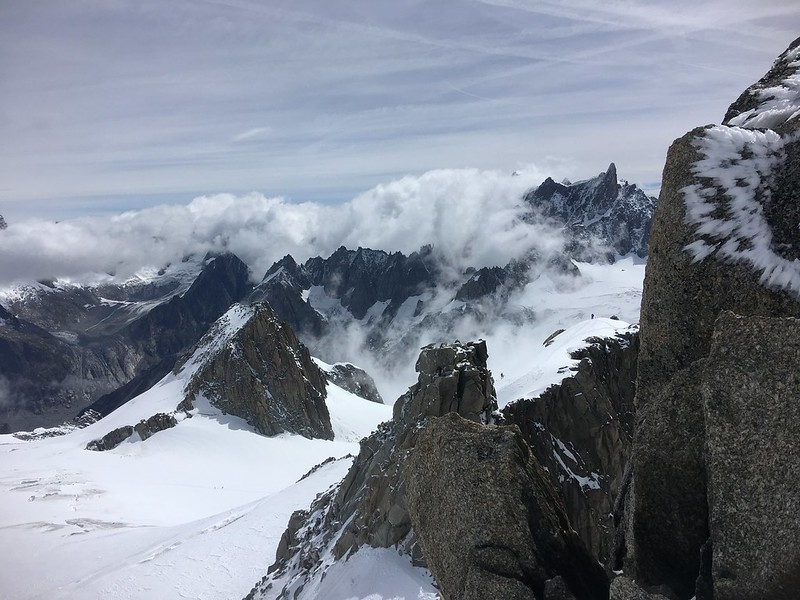 With the abseil complete it was a straightforward traverse of a snow slope to reach the crux of the route. Ah lovely, more rock climbing in crampons.

As it was, the crux wasn’t actually that complex but due to the poor snow conditions and the loose terrain on the chimneys meant that it took a long time for my partner to find a good line to take up the route.

Here’s Andy topping out behind me; our group of three friends had caught us up on the ascent of the crux. 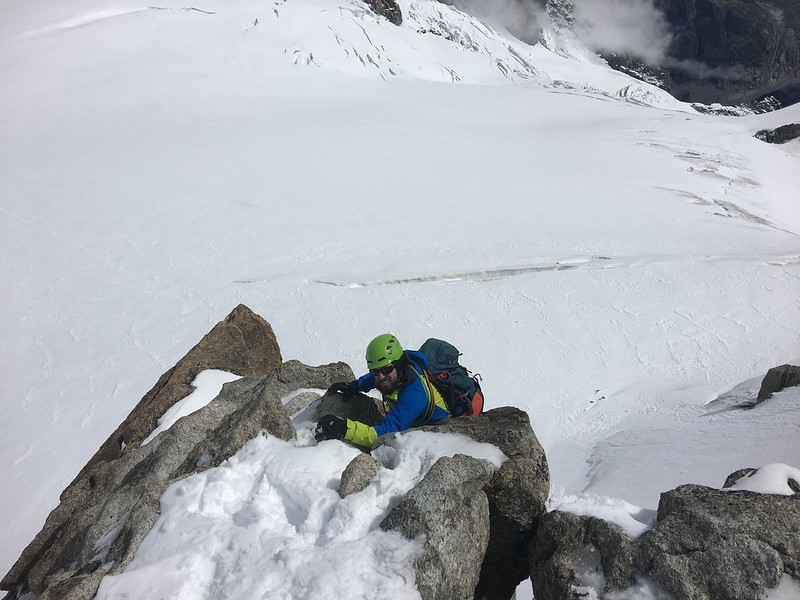 Andy’s exclamation that the crux was like a Scottish III maybe a IV made me pleased, yes I’d had a few moans en-route, but I got up it on second. (So fingers crossed for a good winter this year!)

The rest of the group were off to the Cosmiques hut to do the arete the following day. Having already done this a few days earlier, and my partner minus sunglasses at midday, we decided to head back.

If there’s one thing I learnt doing Alpine climbing is that I have to stop underestimating myself and have more confidence in my abilities.

Before we had left the Midi station that morning there was a lot of grumbling within our group and amongst other alpinists about the poor snow conditions and poor visibility. We had already seen two groups return from failing to get up Mont Blanc – poor snow conditions had led the Chamonix guides hut to recommend people did not try the mountain. We had certainly seen avalanches.

But I had felt confident in descending the snow arete and taking a look. Being in the blank fog didn’t faze me, I had a compass and was roped to someone I trusted if one of us was unfortunate enough to end up in a glacier. And I was confident enough to deal with it if it was him.

My last trip to the Alps led me to decide to do the Winter ML training, this trip has left me being confident to winter climb this season and consider other options too… watch this space!

One Reply to “Mountaineering on Pointe Lachenal”