Having had an amazing time in Rjukan ice climbing last year I was very excited about our trip to Cogne this year, but very aware that it wasn’t going to be easy peasy climbing.

Rjukan is the ice equivalent of climbing at Stanage, something for every ability, lots of single pitch ice making it nice and short and 5 minutes from the car. Yes there’s multipitch routes and hard stuff to scare the pants off you, but there’s options for not doing these routes and still having a great time.

Cogne is the opposite in everyway.

In the heart of the Alps, Cogne has two main areas for climbing, the Valeille valley and the Valnontey valley – with climbs being on both sides of the valley from the sides of the mountains. The routes form in mountain gullies or from the edge of crags with terrifying chandeliers to huge walls of solid ice.  All of the routes are committing multi-pitch ice which require abseiling to get off.  This isn’t a place to come for your first ice climbing or multipitch climbing trip.

There isn’t a great selection of guidebooks in English for this area either. The new Alpine Ice guide by Mario Sertori is the only one and while it does cover routes in Cogne its isn’t a complete guide and only provide highlights of the popular routes. There’s plenty of French and Italian guidebooks, if you can translate them!

The best sources of information in English are:

Despite the challenges of finding information on the routes, ice climbing in Cogne is a dream for those with experience. There’s nothing better than the delightful warmth in the midday sunshine, which is something that you definitely don’t get climbing in Norway! 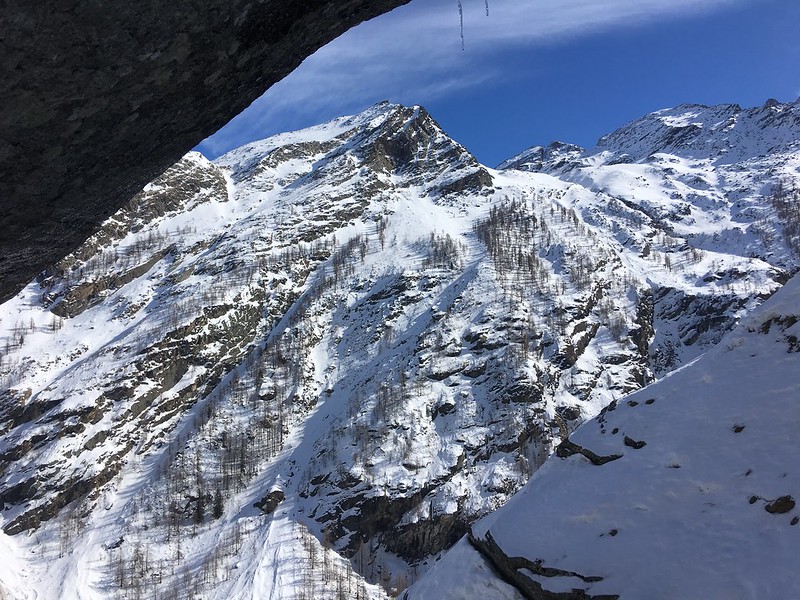 We had opted for our first route to be a WI3 in the Valnontey valley called Il Sentiero dei Troll.

Il Sentiero dei Troll provided a good initiation to ice in Cogne and set the tone for the week. If you want to get out and climb ice you need to be out of bed early (out of the door before 8am) and be prepared to climb all day.

We did the route in 4 pitches of 60 metres with two of these being at bolted belays. The joy of Europe is that many of the routes are at least partially bolted, when you can find them under all the ice! That said make sure you know how to do Abalakov threads as you will still need to do these for some belays.

It was freezing when we left the car park at Valnontey for the walk in and on getting out of the car we quickly put on extra layers. Close to the end of the valley it wasn’t too far to walk in but did give us change to check out some of the other routes. With the warm temperature the week before we noticed some of the routes at the end of the valley weren’t quite formed.

While Cogne is committing ice climbing, it is still pretty accessible with most of the routes being fairly well sign posted at the bottom of the valley (though a guide book is needed to know which is which) and the walk in was on a clear track adjacent to cross country skiing runs. 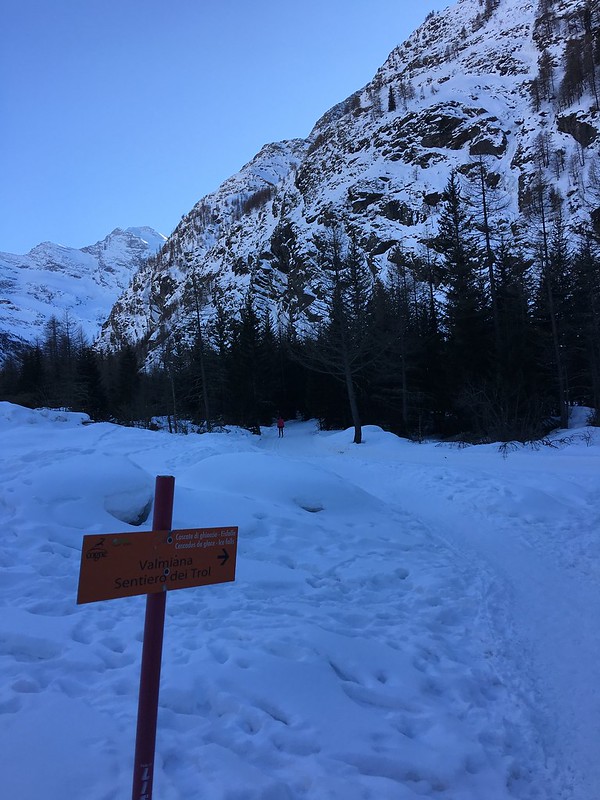 Ascending the steep snow slope to the bottom of the ice was the first task, reminding me that the best place to put on crampons and a helmet is long before you actually need them. 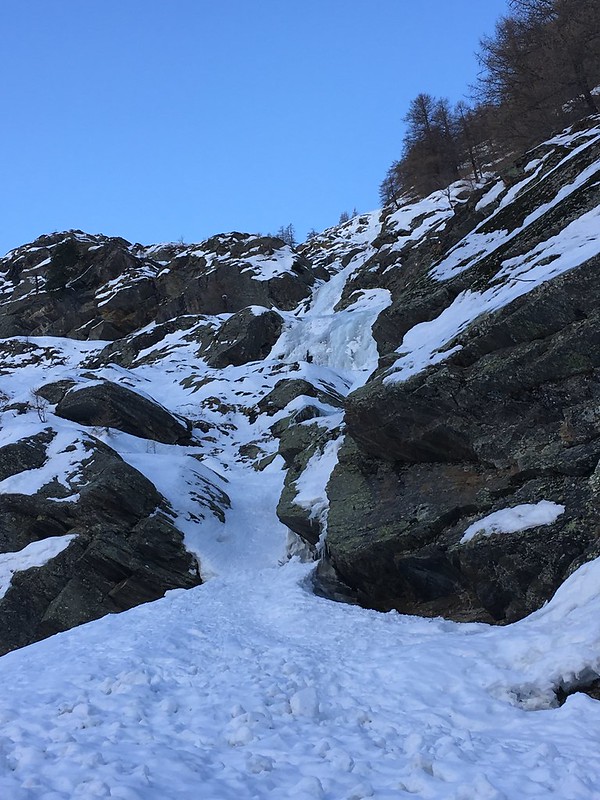 The route was a mix of steep ice pitches and graded snow slopes and by pitch 2 we were climbing in the sunshine and had taken off quite a few layers of clothing. 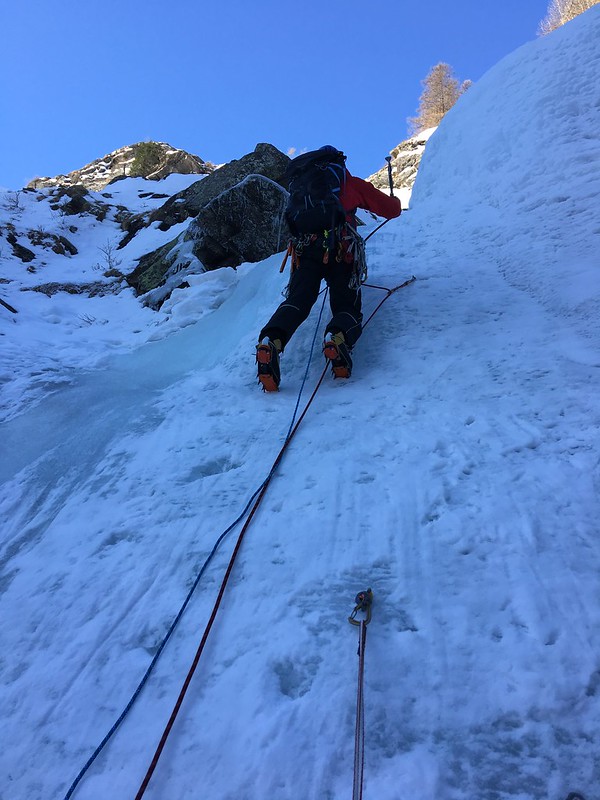 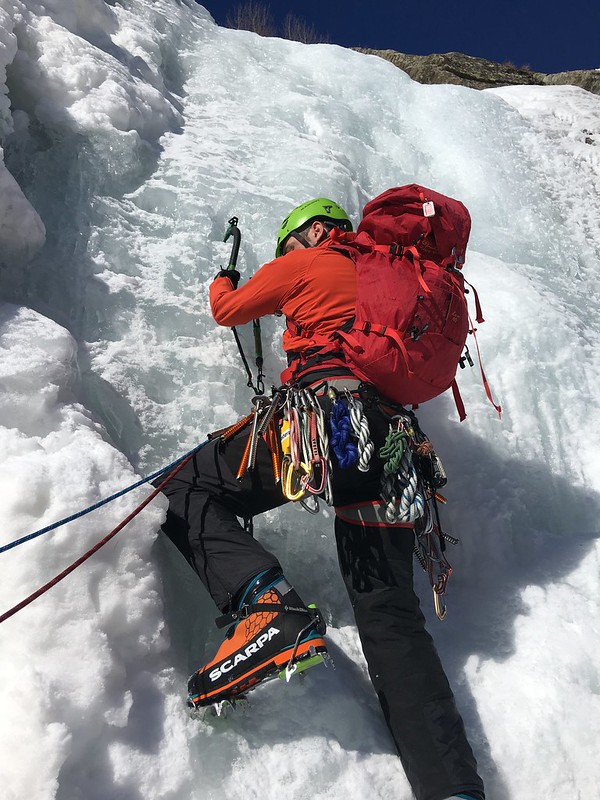 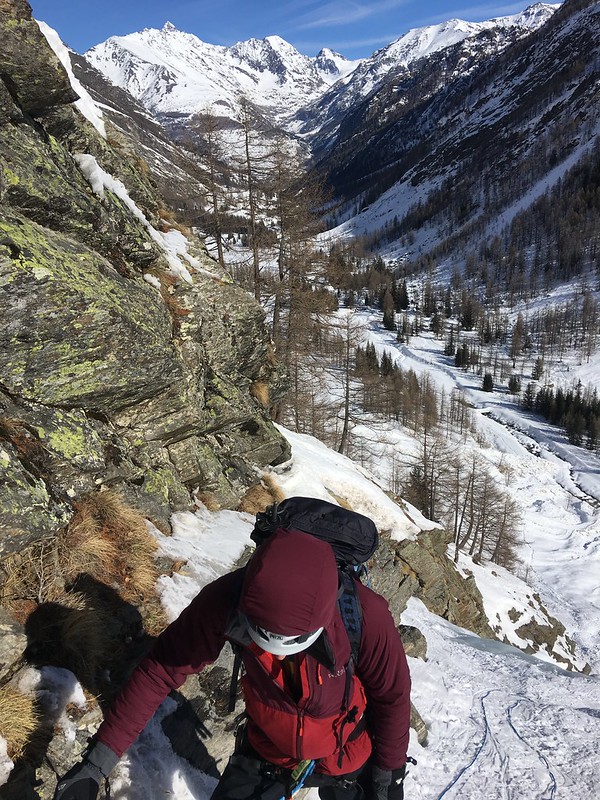 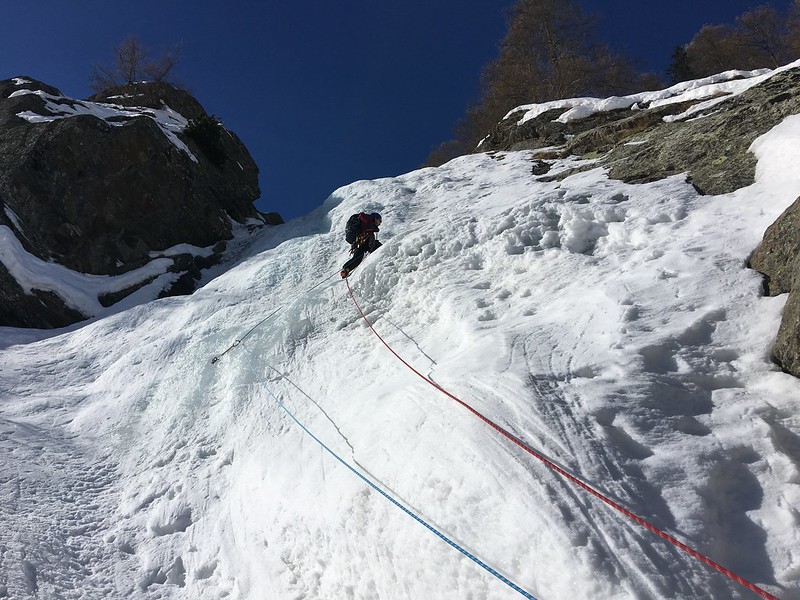 The climbing was fantastic and when we reached the top of pitch 4 we decided we’d enjoyed the best of the route and so abseiled back down. 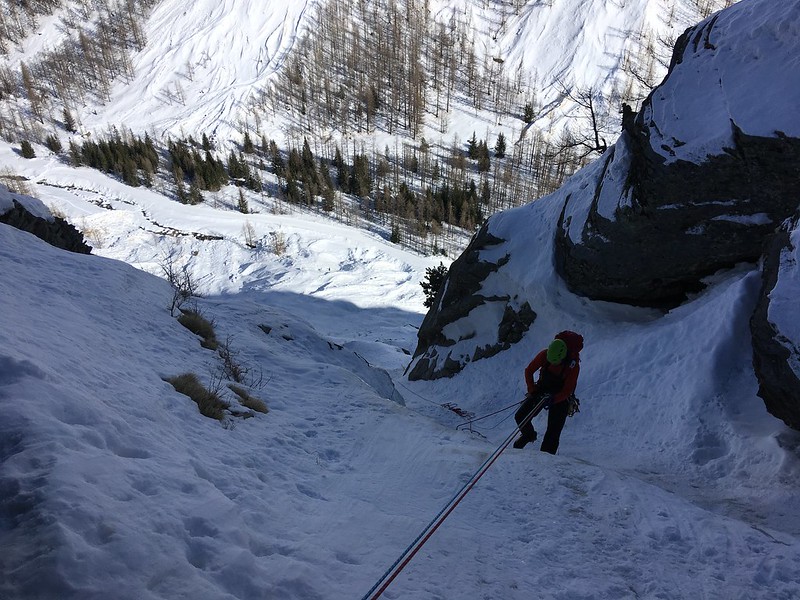 At which point I stopped to take this photo of Jared next to the ice on pitch 3, did I really climb that?! 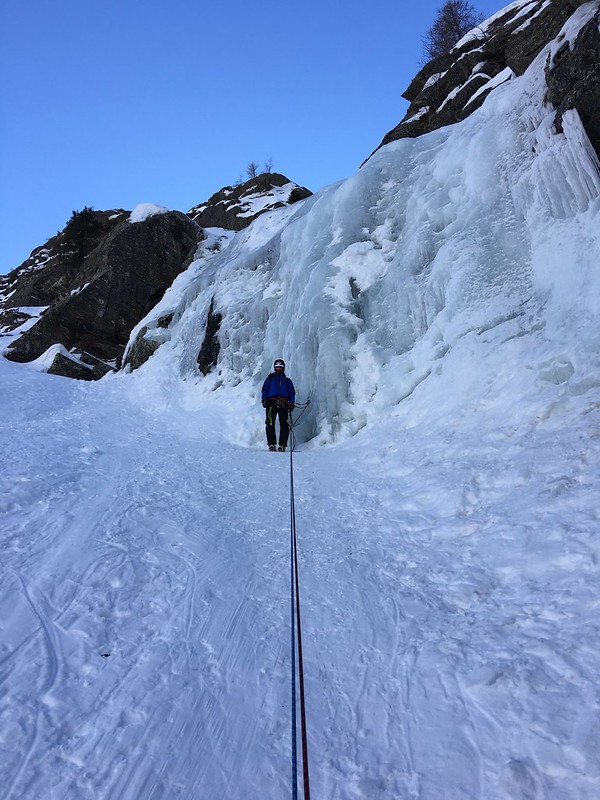 I have to start by saying Fenilliaz isn’t a rubbish route. Had I been in Scotland I’d have been super happy spending the day in a snow covered gully. Having flow to Cogne though to get my axes into some ice I was a bit disappointed by the lack of ice on this route.

Fenilliaz in the Valeille Valley starts by ascending another long snow slope (a recurring theme in Cogne). We started the actual climb from a good belay spot under a huge boulder. 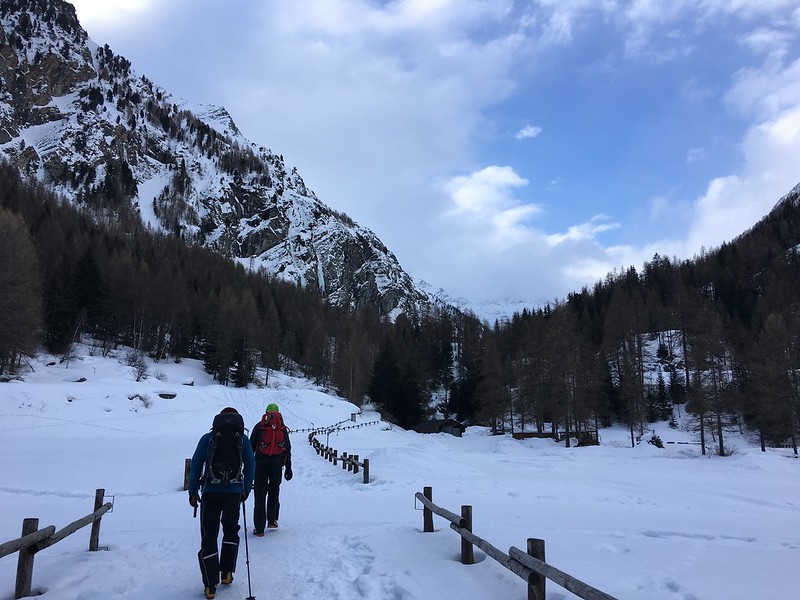 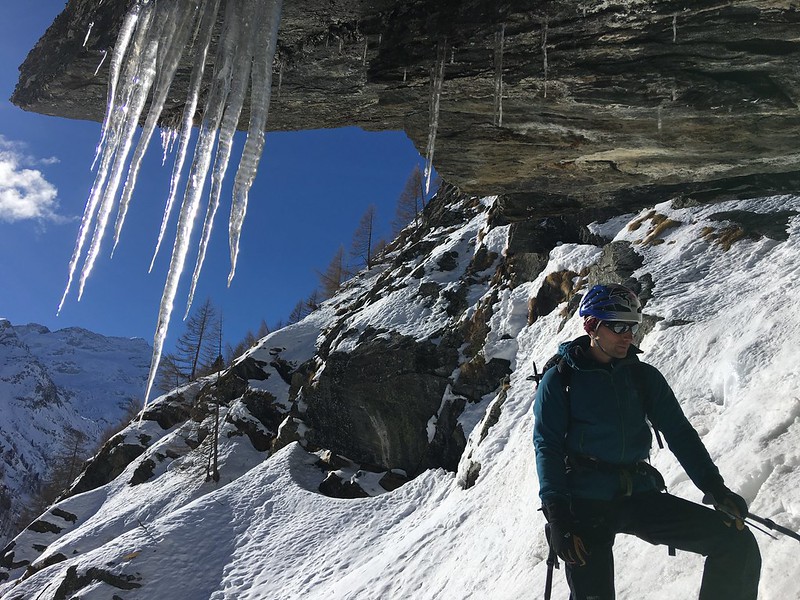 From here the route takes a long steep snow slope to a short ice pitch, before another snow slope. 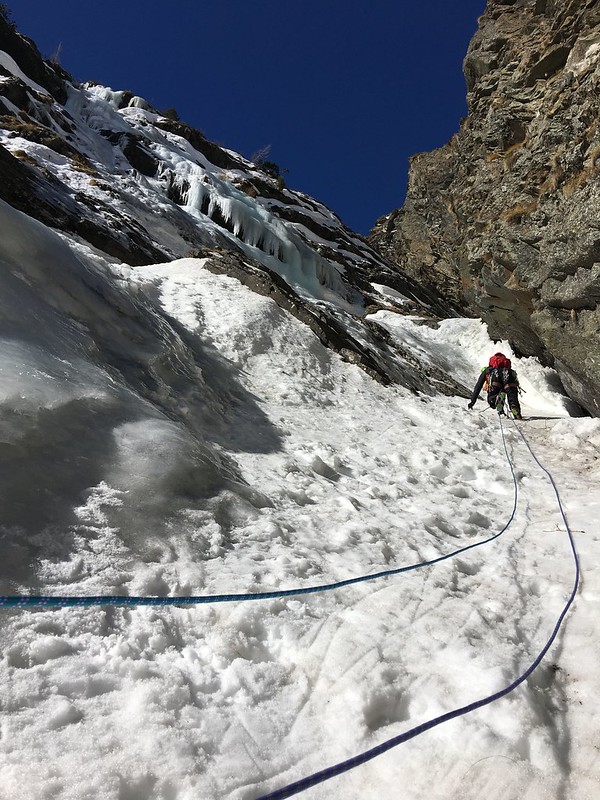 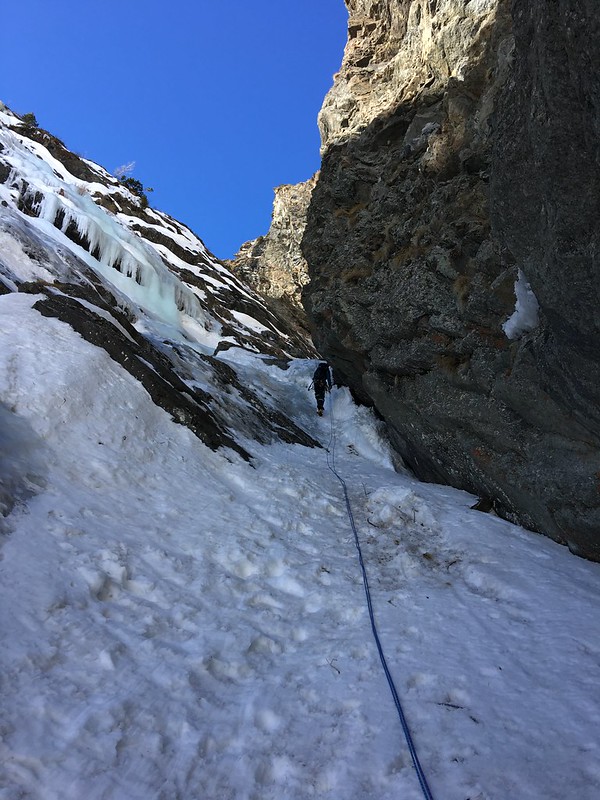 Unfortunately that was where the fun ended and the route seemed to pitter out. Disappointed, and with not enough time left for another route we opted for a short day and a chance to check out the popular Cascade de Lillaz.

One Reply to “Ice Climbing in Cogne – Multipitches galore!”