Standing on mushy snow with my axes hooked around a thin lip of ice, I got that horribly familiar sensation in the pit of my stomach when I really don’t like where I am stood. And I had to traverse off the mushy snow to get on to the ice.

Having had a fantastic time climbing on Il Sentiero dei Troll a couple of days earlier, we headed back to the Valnontey valley to climb the waterfall next to it, Valmiana another WI3. My initial reaction was that the first pitch looked massive and steep, but I tried not to let that put me off. 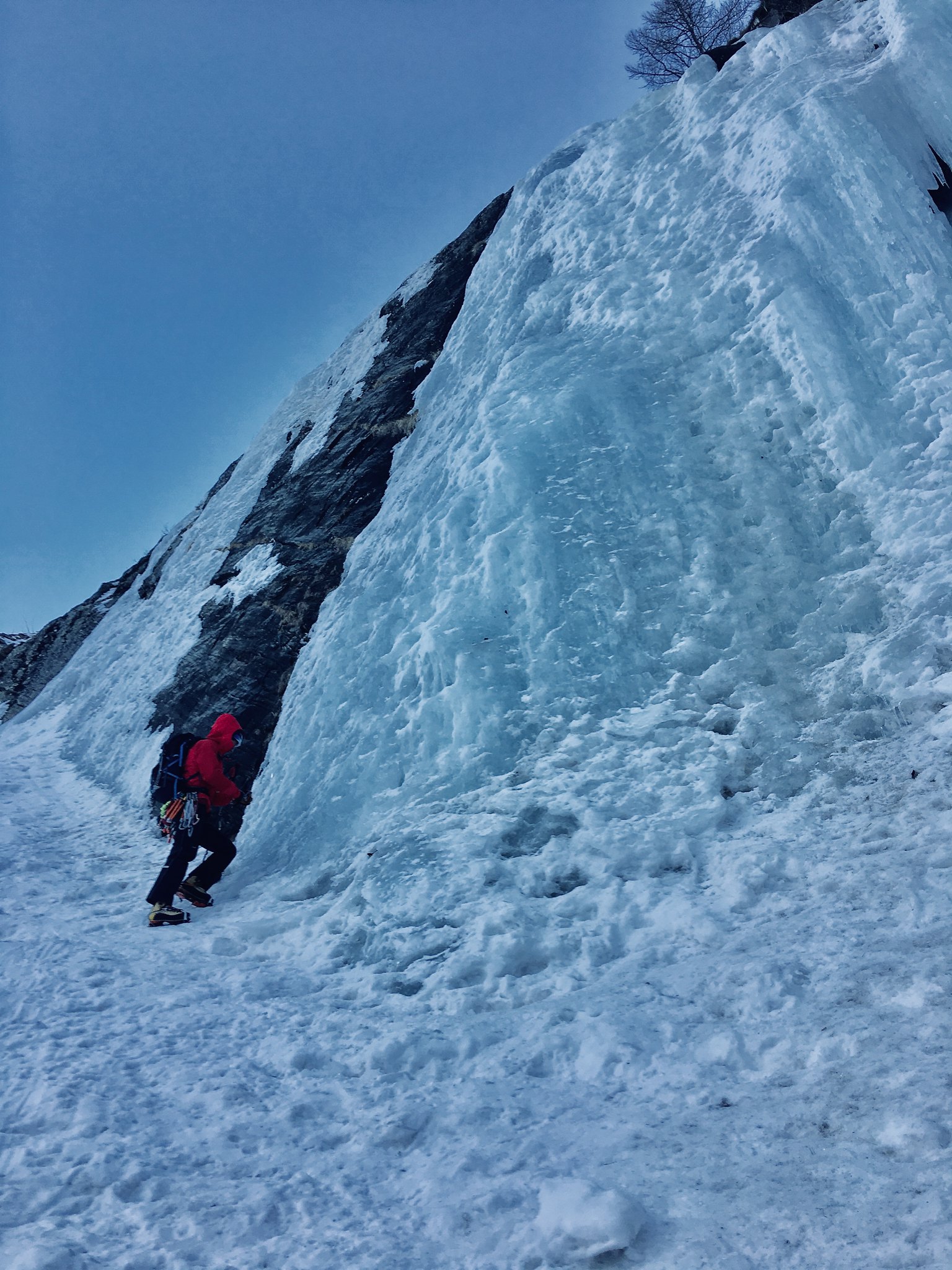 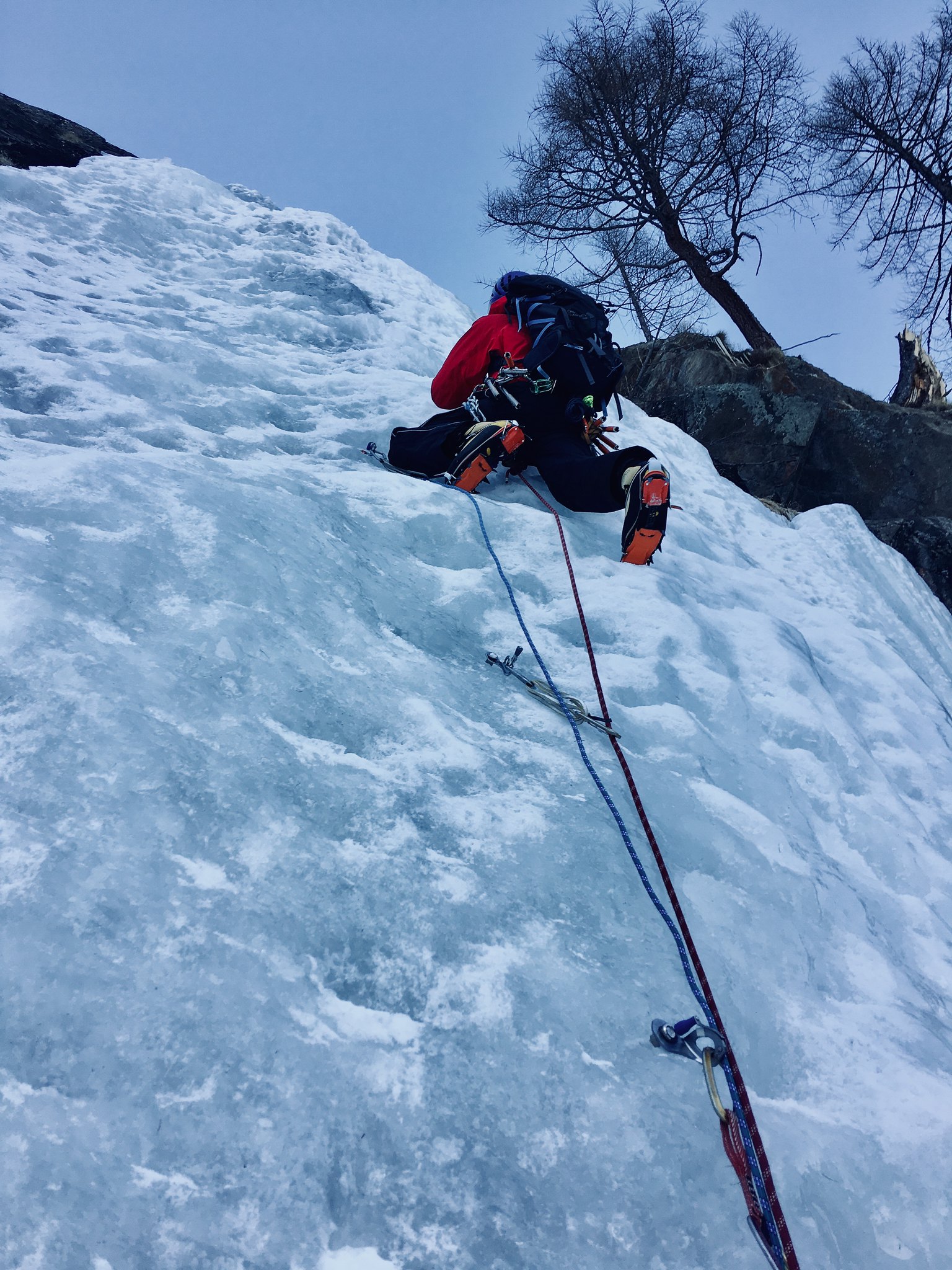 As it was the first pitch was steep and felt quite hard for a WI3, but it was stepped out from previously climbers so didn’t feel that tricky.

The second pitch was a nice snow plod with an ice pitch in the middle, by which time we were already in the sunshine. The third pitch was also straight forward too. 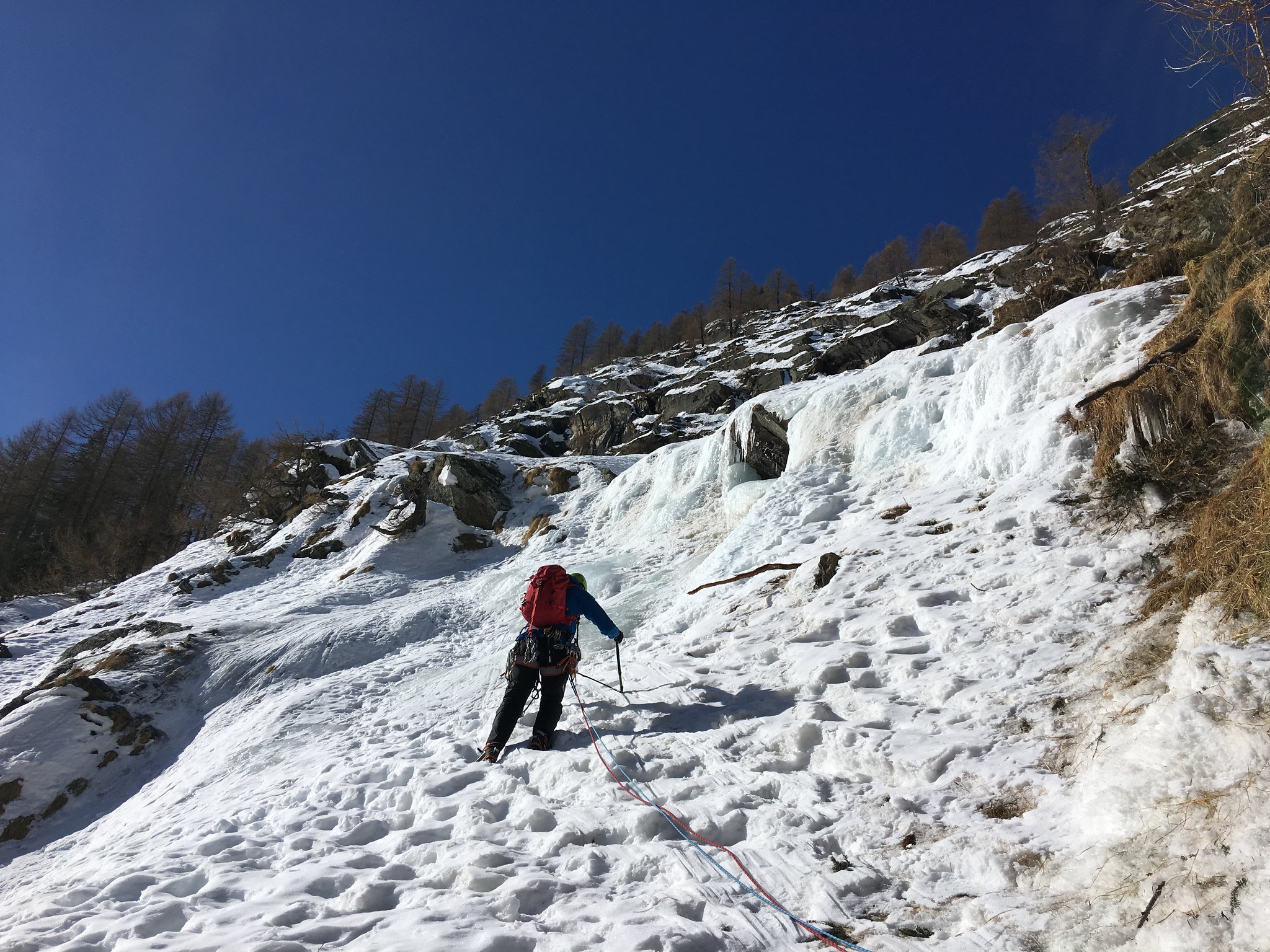 It was the fourth pitch, when we were already about 120m up the waterfall that I met my match, the mushy snow and horrible traverse.

Just as the hard, not stepped out ice ended the mushy snow began, with a traverse aiming for the gap in the rocks. 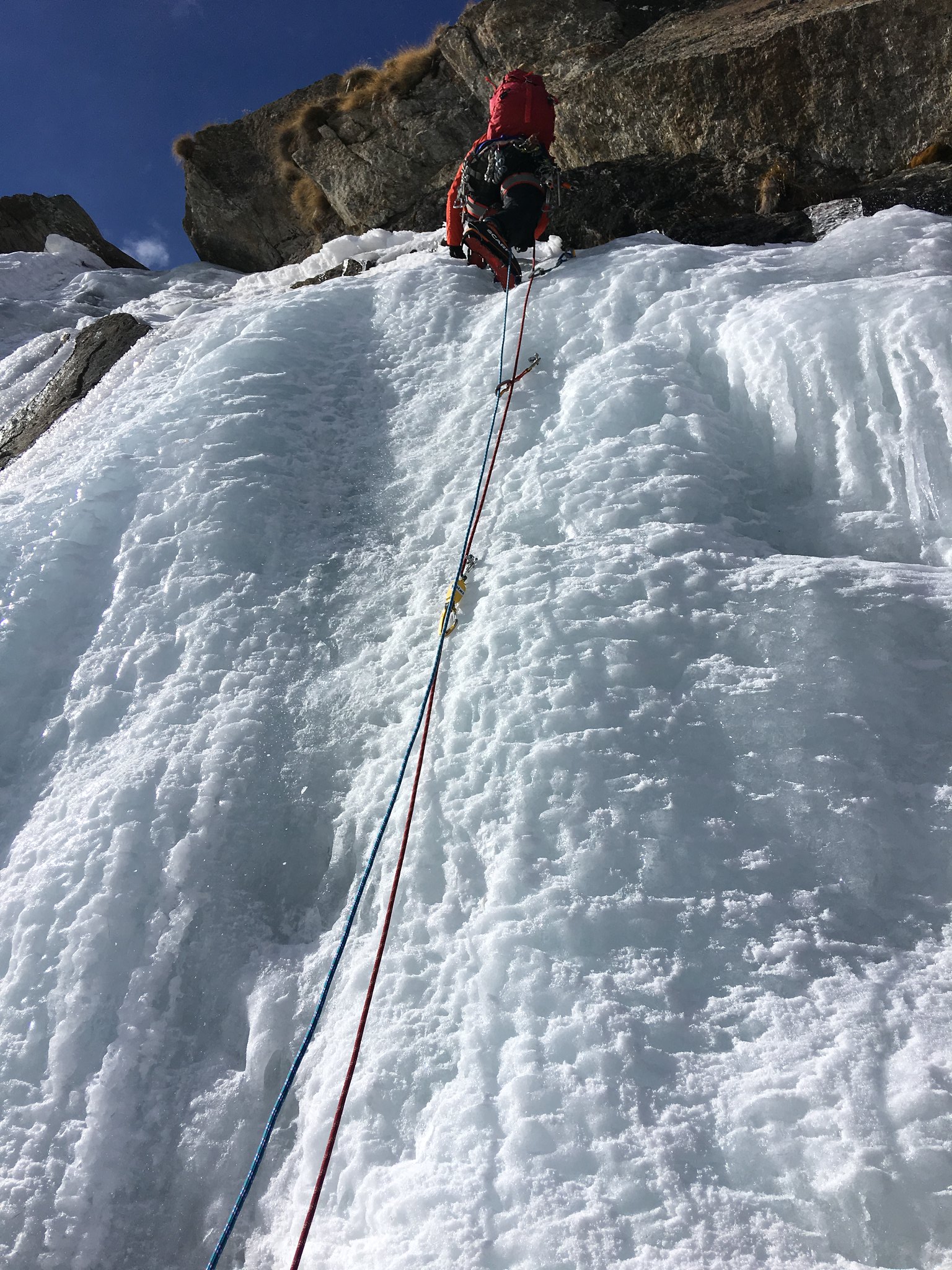 I didn’t really enjoy trying to kick out warm wet snow to get across to solid ice, so when I emerged out of the top of the pitch I wasn’t very happy. Thankfully the final pitch was a long steep snow pitch, (in the shade so not mushy!) and a solid bit of ice, which was hard on the calves at least felt more secure.

After 3 days climbing we had got into the rhythm of climbing but I was also starting to ache all over. Despite the huge walk in to Flash Estivo, right at the end of the Valnontey valley we opted to try the WI3 route.

So on the first over cast day of the week we headed for an hour and a half walk down the valley to the bottom of Flash Estivo. The first issue was that it was starting to snow and we were heading up a 500m 45 degree snow slope to get to the bottom of the route. This wasn’t exactly the quickest route to get to.

As we walked down the valley you could see the aftermath of earlier avalanches. 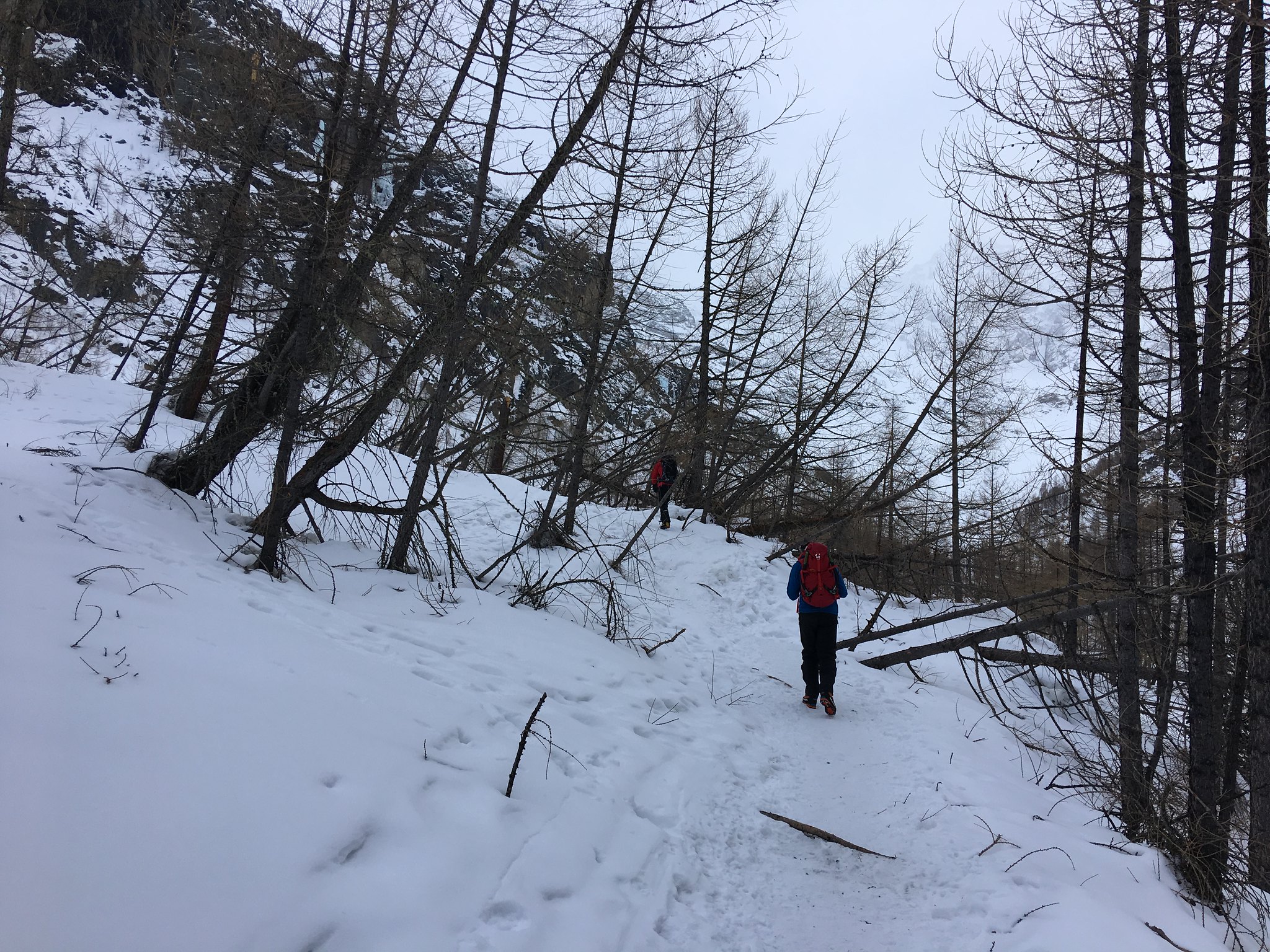 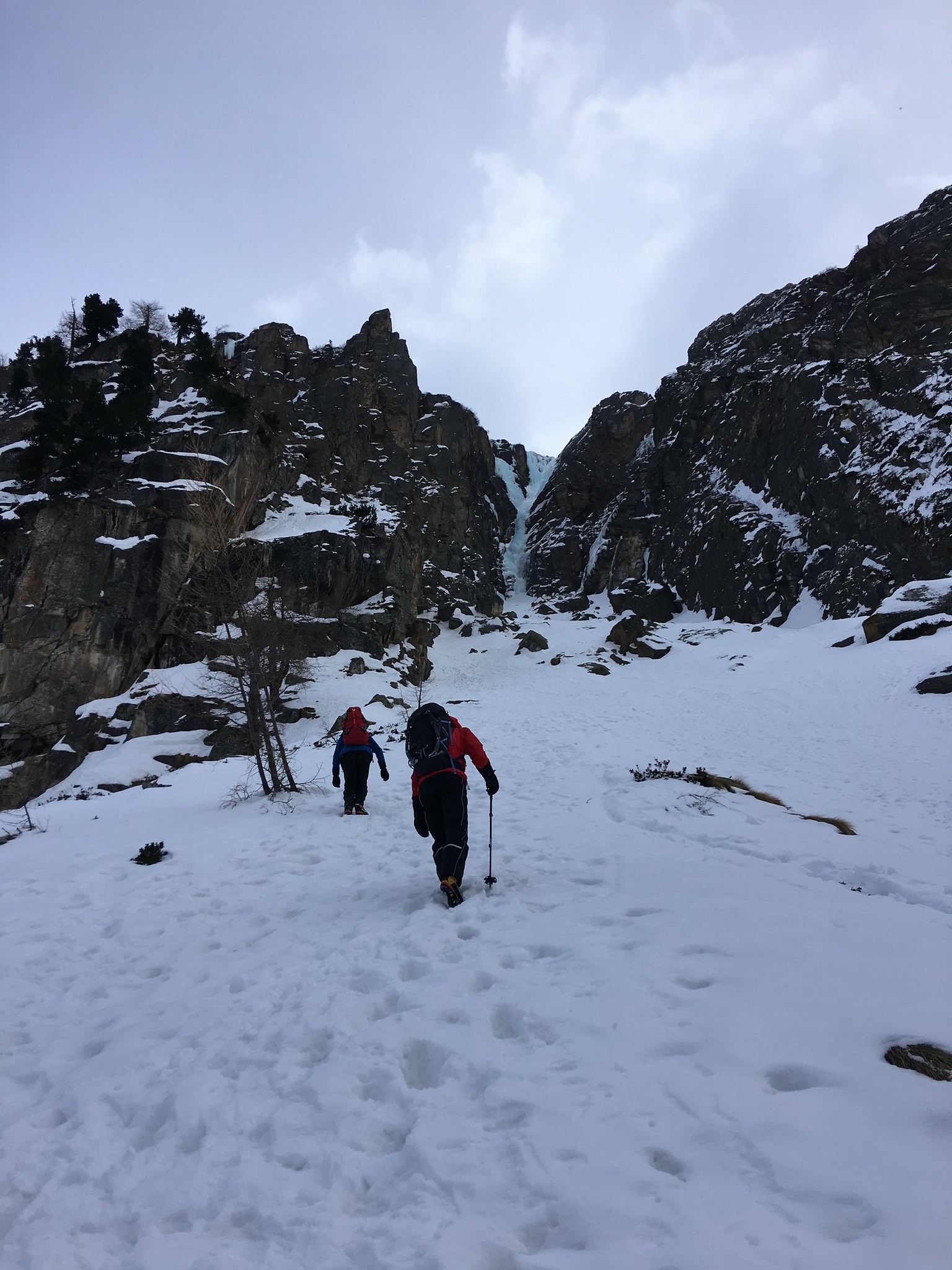 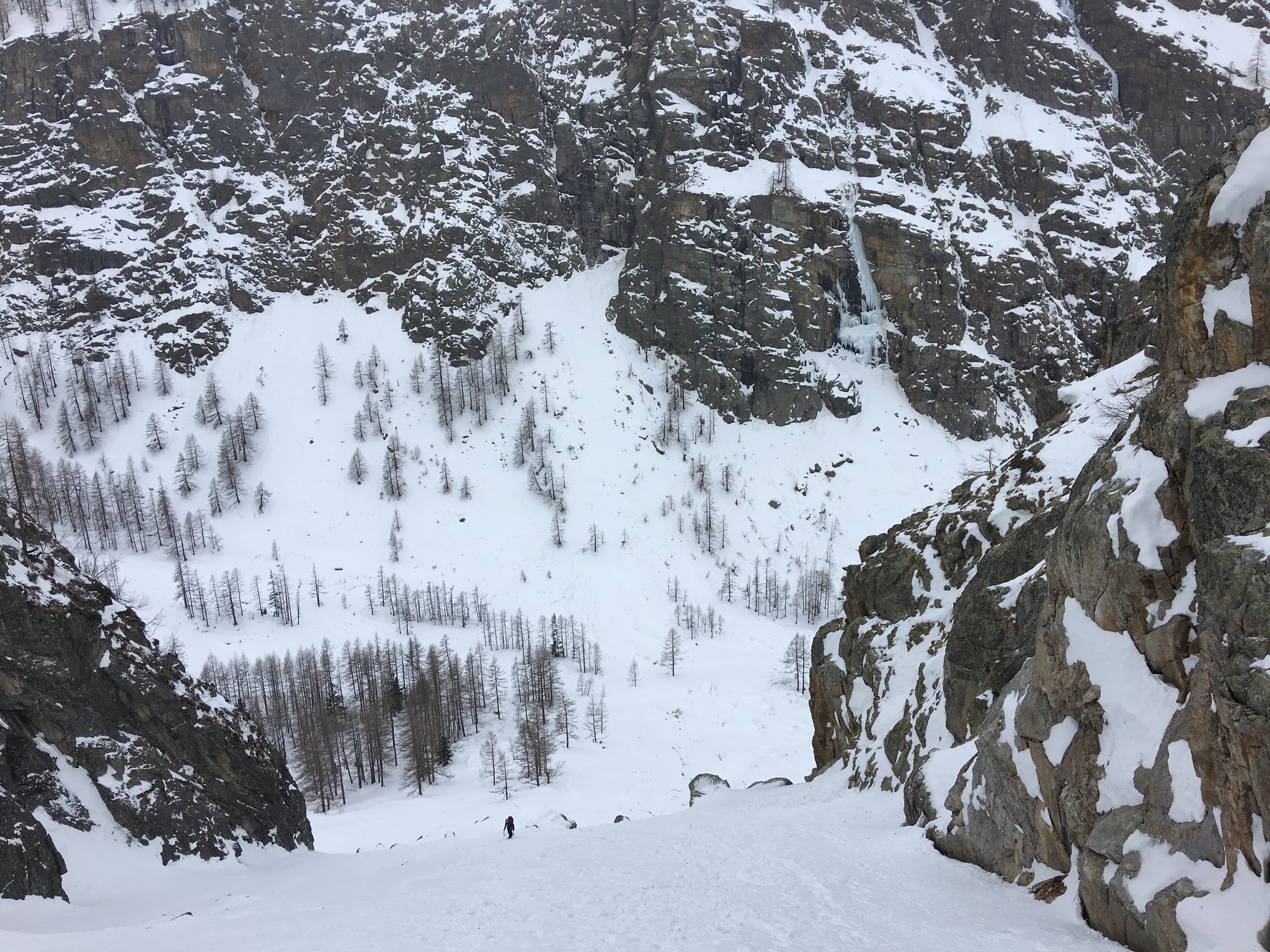 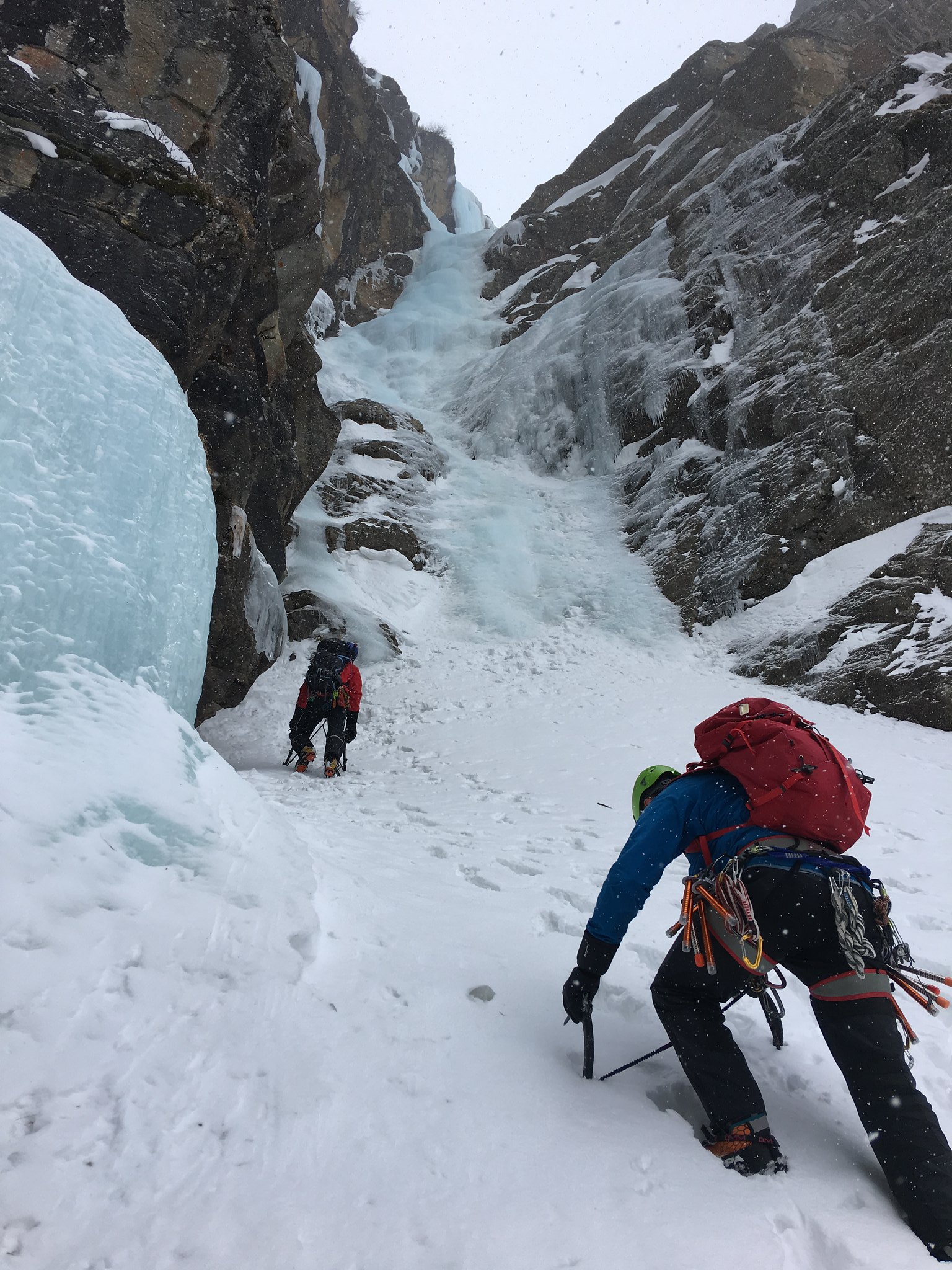 As we started the route the snow set in for the day. 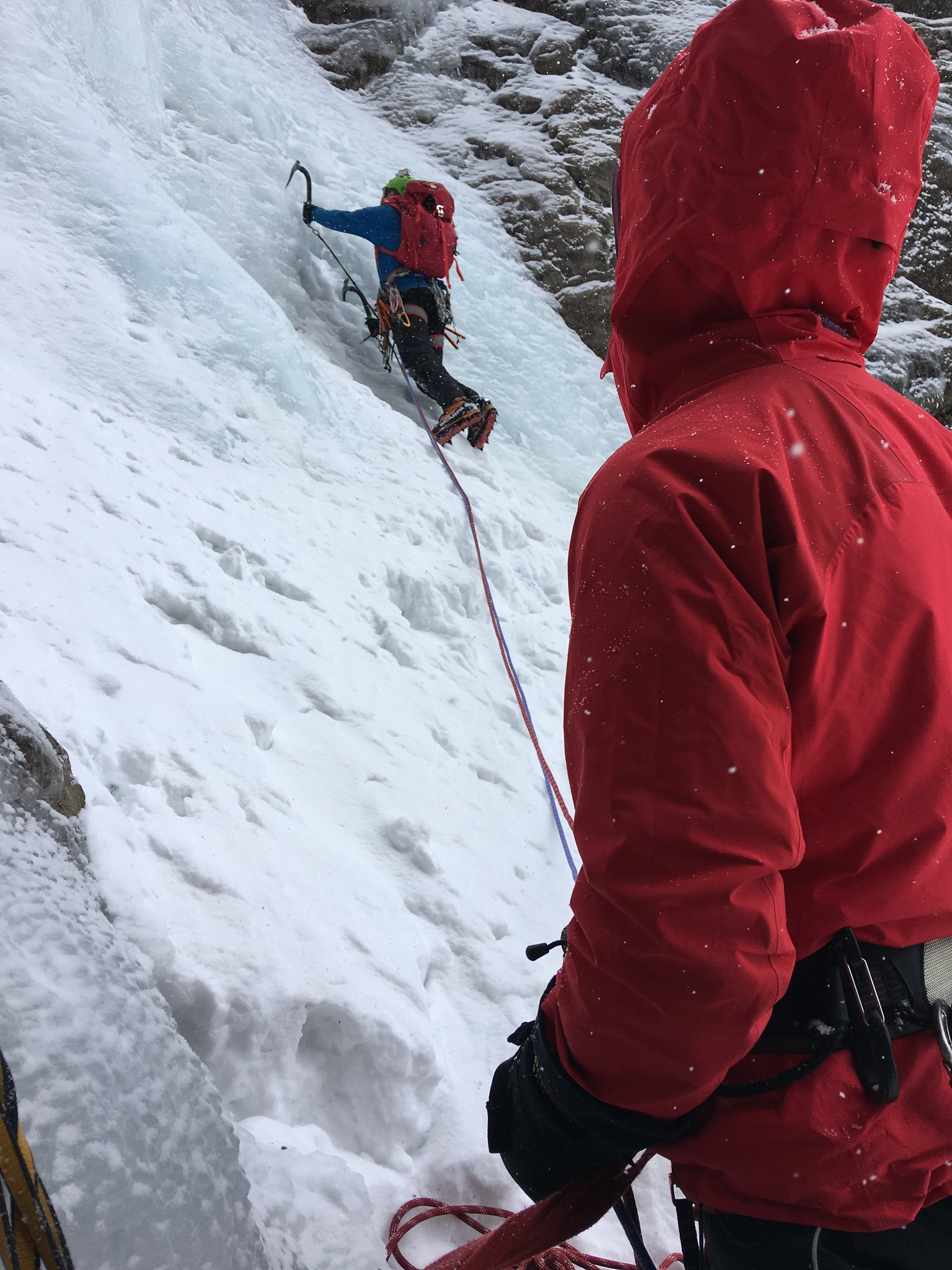 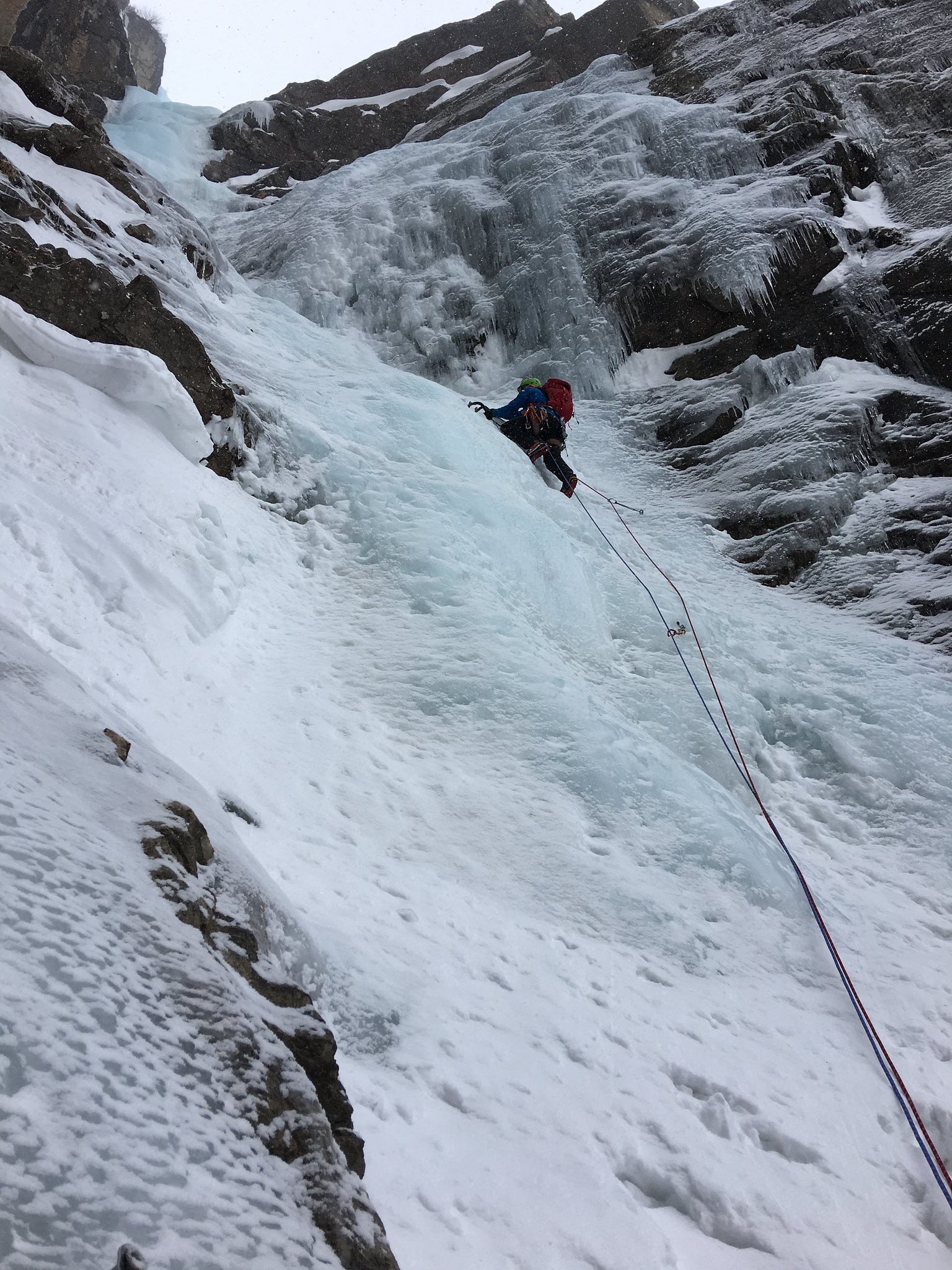 As we set off up the second pitch it became apparent that the ice was either solid or totally unstable so after much effort in trying to find a good route up it we eventually bailed off. 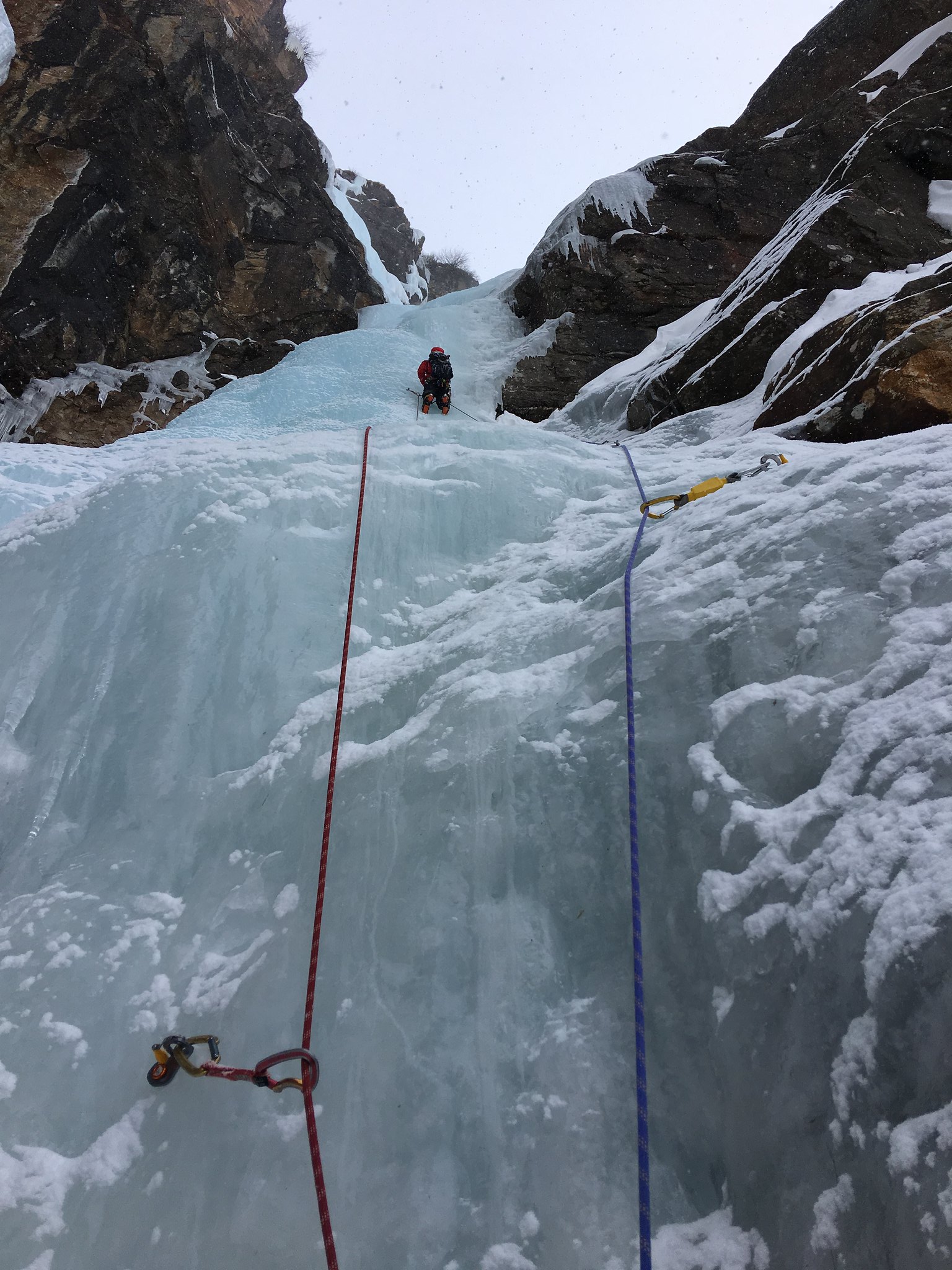 Whilst we were all a bit disappointed it was the right decision given how long it was taking to get up the route and the weather conditions.

Turning back on a route is never a bad decision. Others might have battled on, but given the remoteness of our route and the deteriorating weather it was the right decision. By the time we had abseiled back down and walked out it was dark and snowing heavily.