I should have gone cycling on Saturday in training for my next big trip. But I’m not a cyclist at heart, so when a friend asked if I wanted to go hill walking it didn’t take long for me to say yes. Especially when I saw the forecast was going to be sunny.  I’d never been up Bleaklow in the sunshine before.

Bleaklow, in the Peak District, is about 30 minutes drive over country lanes from my house. The typical weather I endure is dense fog and rain, but instead on Saturday I had glorious sunshine, although it was cold and windy.

We parked at the car park at Torside Reservoir, next to the Longdendale Trail. This is a section of the longer Trans-Pennine Trail, which is a fantastic long distance route for cyclists and walkers. Our route for the day was to head up Wildboar Clough to check out a mini scramble up the river before heading across the fell top to the summit cairn. From the Trans-Pennine Trail track we clambered over a couple of rickety stiles and through the woodland on a path that is clearly little used.

We soon found that the river, while being a great route to handrail up  or down the hill in the mist and fog, is largely full of green damp and slippy boulders, making a walk hard work and a bit lethal. As we’d both started to slide on the rocks, we decided to head away from the riverbed and up the grassy sides of the clough avoiding the scramble and the potential catastrophe.

There was a lovely view from the top of the river though.

From here we enjoyed a bog trot to get onto the Pennine Way which we then followed to the cairn marking the summit. Bleaklow summit is a bit of a non event, as a huge plateau larger than its neighbour Kinder Scout (but lower) it is a featureless terrain which can test even the best navigators in poor visibility.

At this point, with time on our side we decided to carry on to High Shelf Stones trig point – while this is not the summit top of the plateau (and busy as close to the Snake Pass road) it is considered a top in its own right and worth a wander over to as it has great views out across Manchester and beyond. However, on Saturday it was windy and cold so we had a look at the aircraft wreckage as we passed it and hid behind rocks near the trig point for lunch. 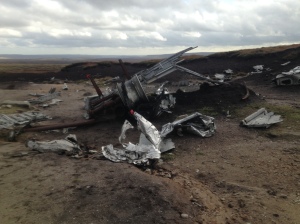 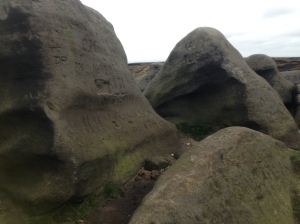 The aircraft wreckage on Bleaklow is some of the most complete and extensive that I have seen in the Peak District but it is certainly not the only one around as the area is littered with wreckages.

From High Shelf Stones we contoured around to Dog Rocks and then turned right and headed directly across the moors thankfully not bog trotting. We crossed the line of newly restored grouse butts to pick up the Pennine Way trail and head back to the cars in the valley below. The whole walk took about 5 hours, including a lunch and a lovely 15 minutes lying in the heather gazing at the blue sky.

One Reply to “Autumn on Bleaklow”