Knowing that Saturday was going to be wet we planned a great Friday for our final day in the Dolomites, heading to Corvara, a town recently expanded around the ski industry with shiny new ski lifts and outdoor shops and cafes catering for the Apre skier. It’s certainly a contrast to Cortina with its alpine war history, 1950s Winter Olympic legacy and 1960’s James Bond style ski lifts in Cortina. (See the Marino Bianchi route for an example!)

Having decided the Piz da Lech route in Corvara looked suitable challenging in the rockfax guide we headed up the two ski lifts to the bottom of the crag. (In particular the photo of the traverse across the rock face taken from the view of the cable looked impressive and had me simultaneously excited and crapping it!) 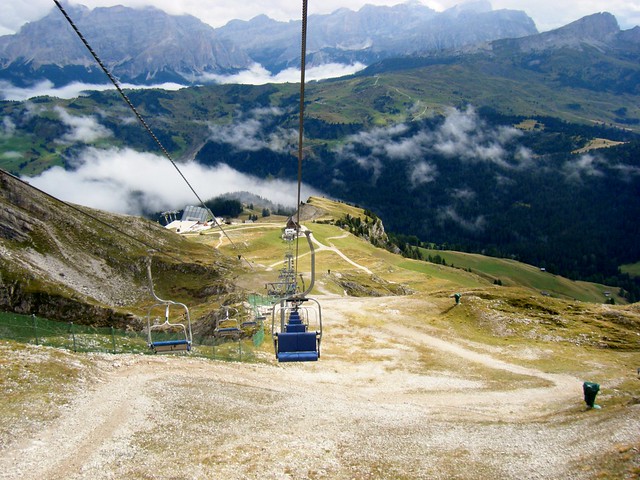 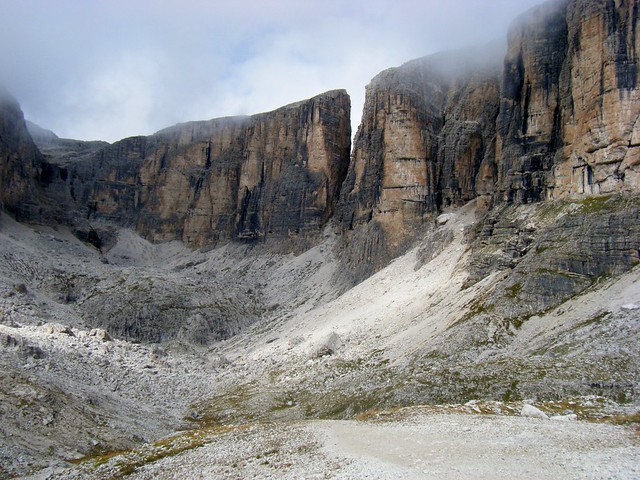 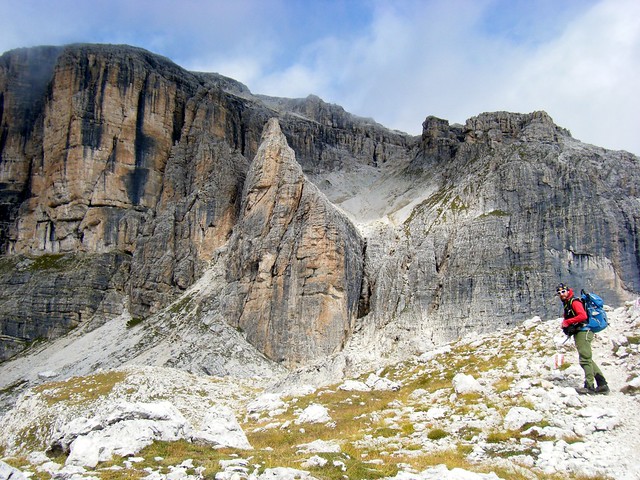 The route is graded 3b so I knew it was going to be challenging in places and while the guidebook suggested 2 hours or so for the route it only took about an hour to the top of the crag. For much of the route it was not much harder than others we’d been on that week, with plenty of scrambly bits in between bits of climbing and walking. 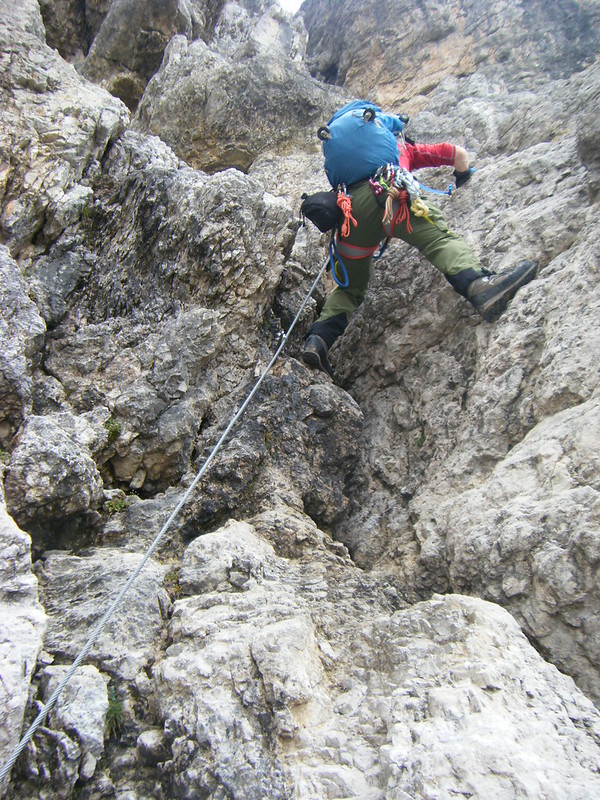 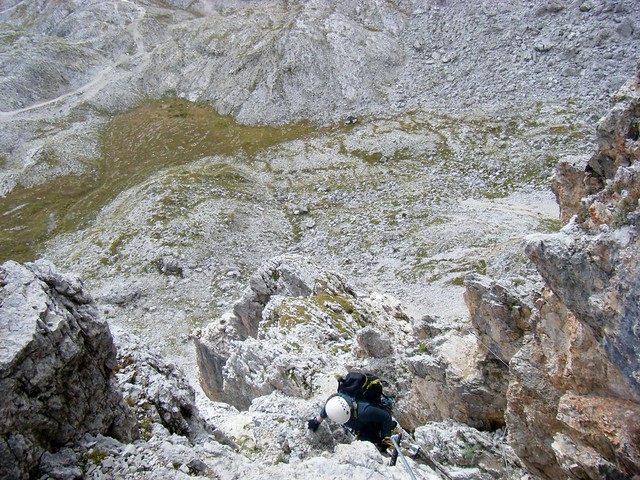 After the airy traverse, which wasn’t as scary as it looked, the most difficult bit was the two ladders nearer the top of the route, which didn’t even look that hard from the bottom. 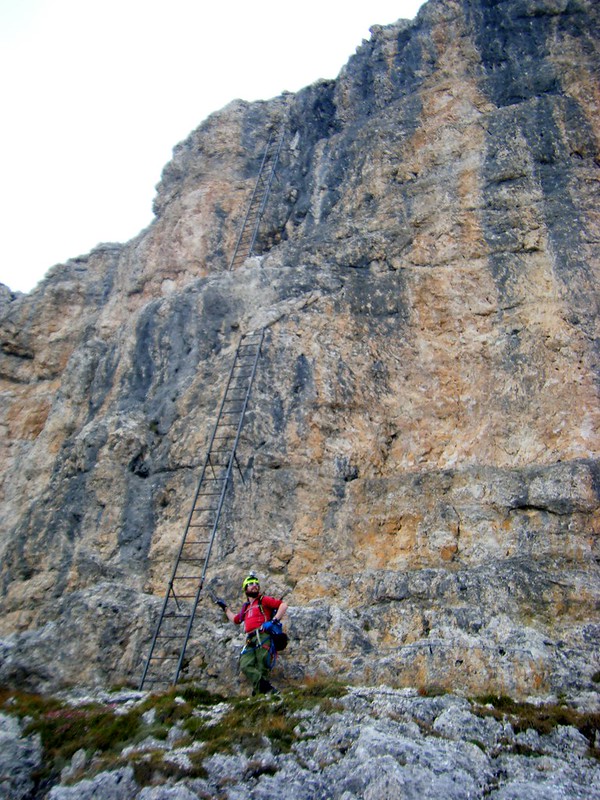 As I got to the top of the second ladder not having found this route that hard, my confidence disappeared. It wasn’t actually that difficult to step off the ladder, around the boulder over the airy drop below. However, my via ferrata lanyard was the elasticated type and was therefore just a little bit too short to get it over the cable bracket to allow me to continue up. So stepping out over the abyss below was more tricky with a shorter lanyard!

From there the route was scrambly and easier until we reached the top. 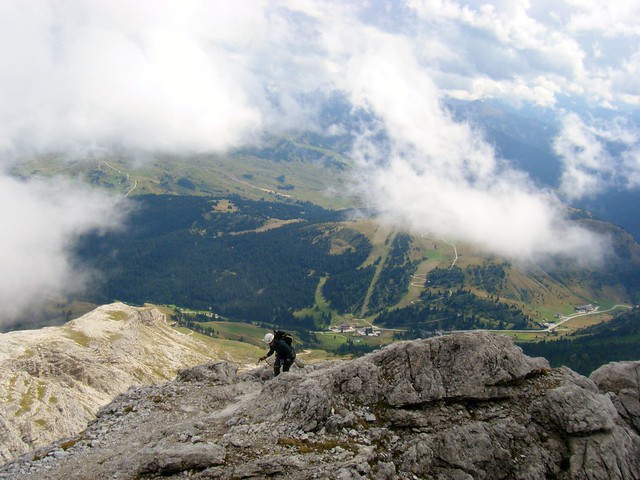 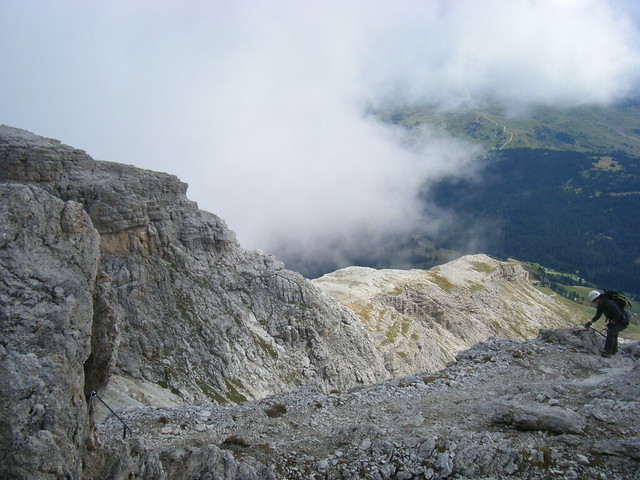 The top of the via ferrata however isn’t the end of the route, as the path continues upwards to reach the top of the peak. Worth the slog up to reach the summit, over 3000m high – amazing views as the clouds parted revealing a canyon with an immense drop below. Breathtaking and not just because of the altitude! 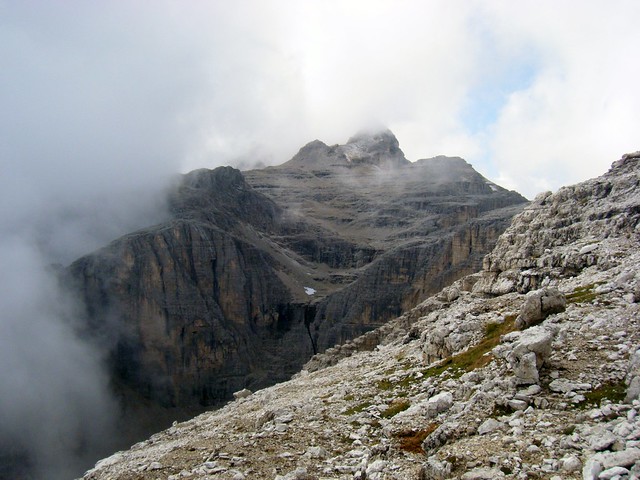 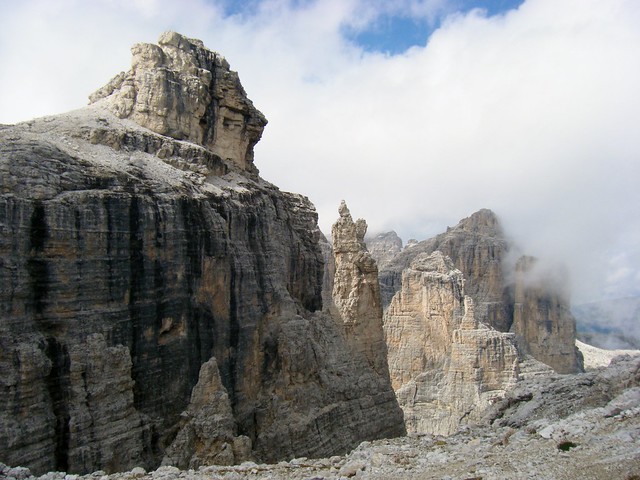 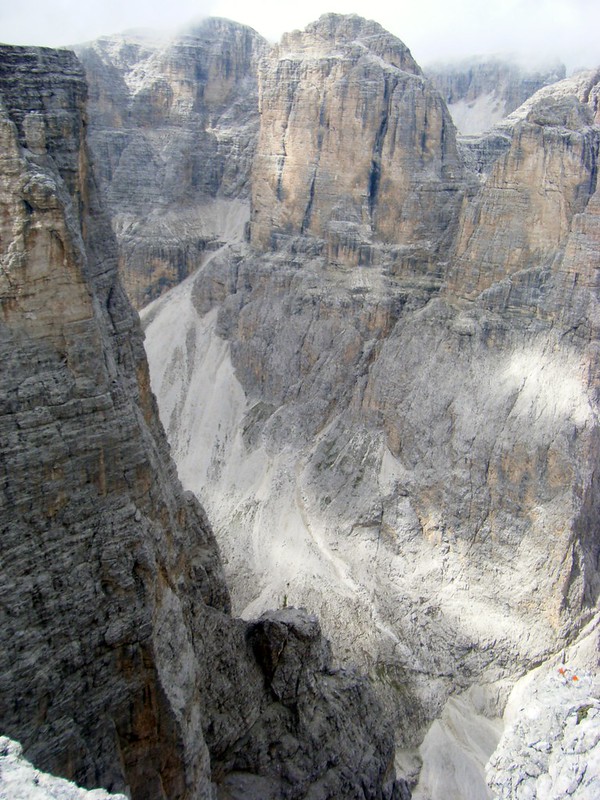 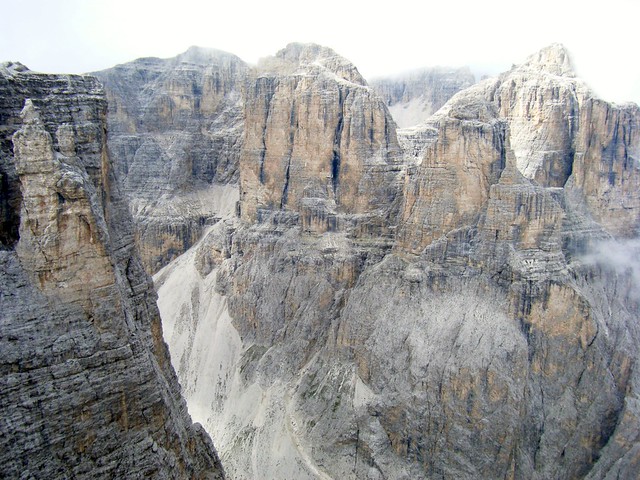 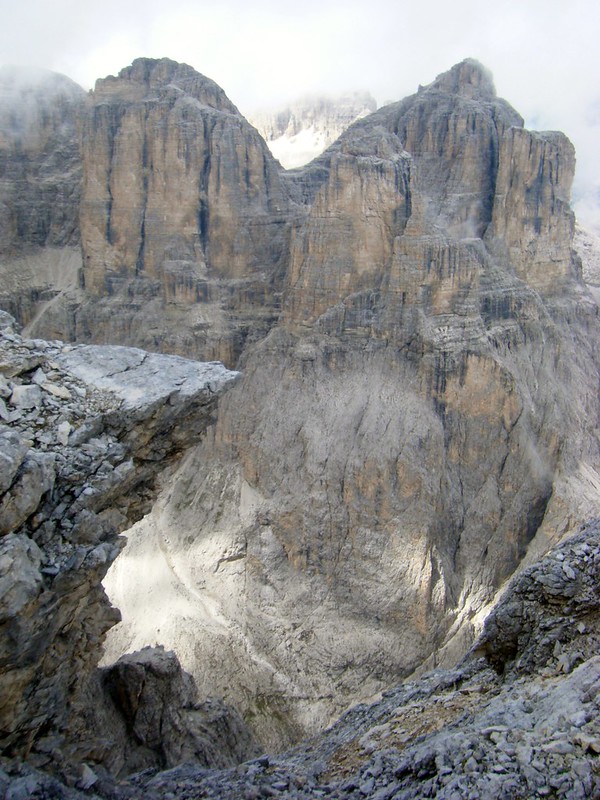 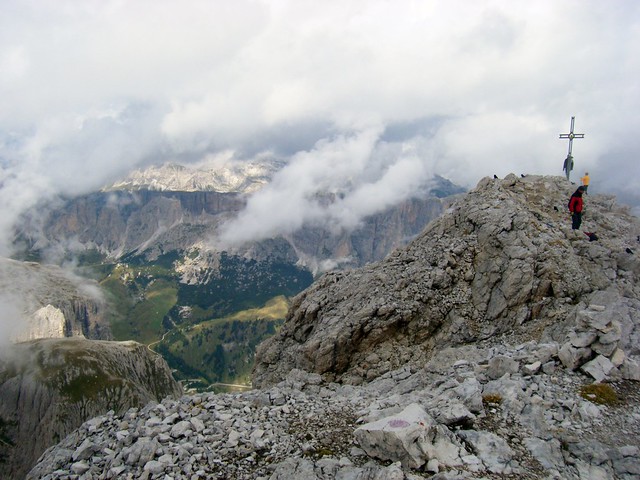 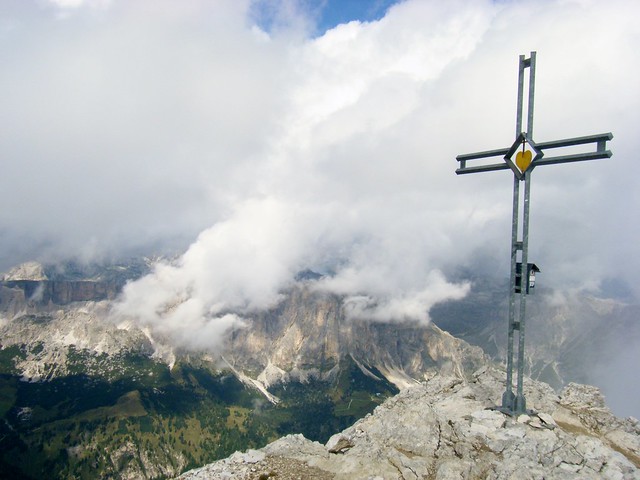 The route down is a path clearly marked and while it is straight forward there is one ladder to descend (though easy to do without a harness) and one section of cable, but again this is more because the scree path isn’t nice to descend rather than it being tricky. 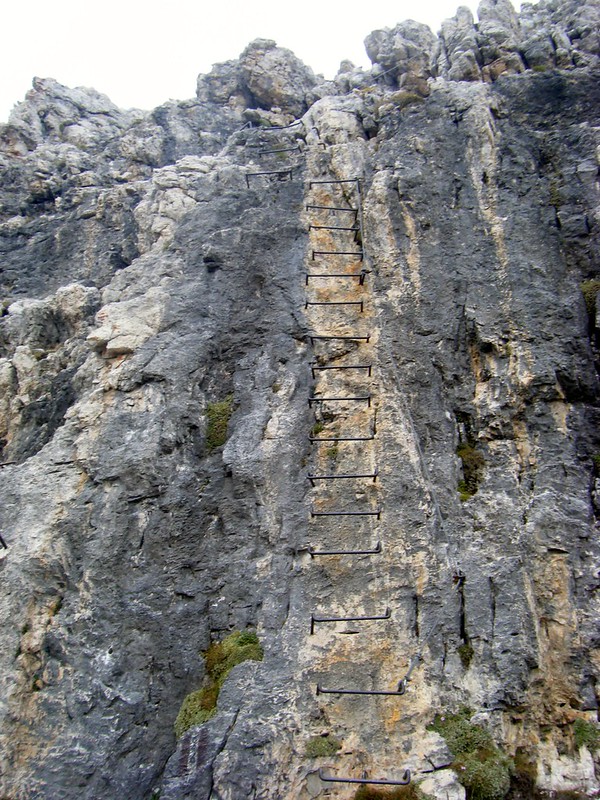 Here you can see the route drop off the top of the mountain down the right-side and swing left below the crag. 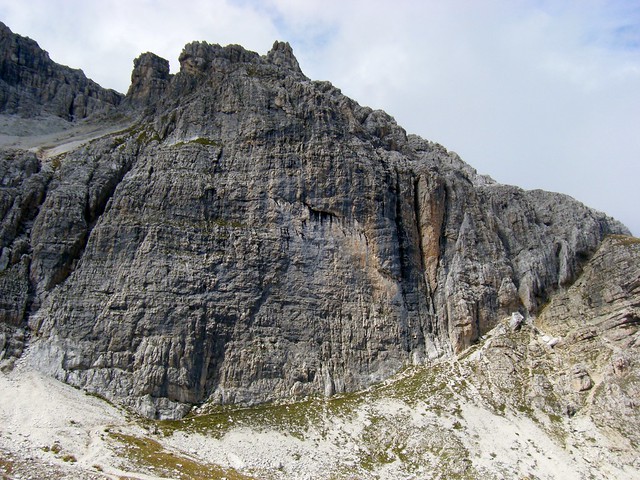