I’ve actually had two false attempts before this week when the rain ruined any attempt to get out with friends. Thankfully it was dry at the weekend and I headed up to my closest crag at Pule Hill for a spot of abseil practice and climbing, ahead of a trip to the Alps this summer.

What do you think of this rope combo for self rescue? 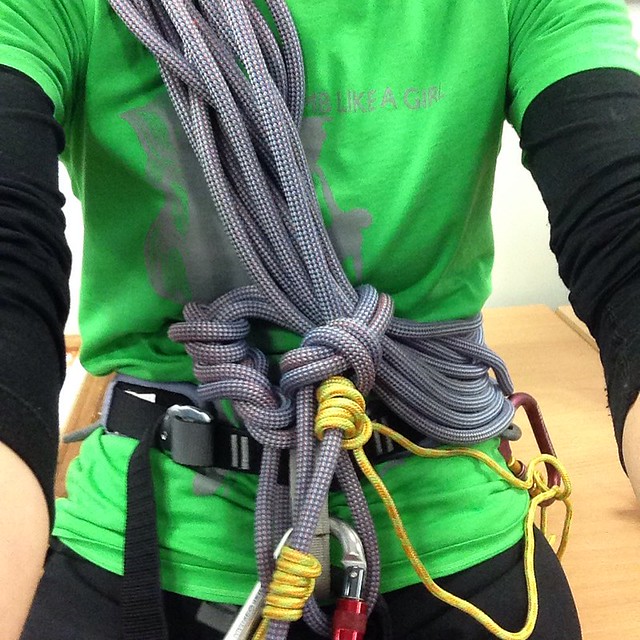 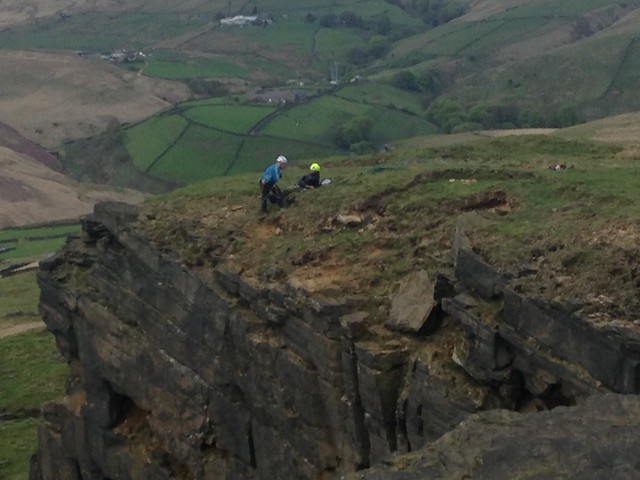 Pule Hill is a fantastic outcrop of gritstone with a quarried area. As my first climb of the season I was a bit unnerved by the exposure of Amen, a VDiff which requires managing your height under an overhang and stepping across a void onto a flat wall. Honestly, it induced a lot of swearing for a VDiff!

The route starts heading into a crack, I always feel comforted in a chimney, despite the slime. But when I realise I need to step out,  I have to challenge the feeling to panic. I headed up the face onto the platform below the overhang and then had to work out how to balance, step across the void, grip and haul my way up the flat face across the other side of the chimney, and then bridge my way up onto the top. A lot of swearing indeed!

I wish I’d just followed Kevin and his 5 year old son William who took a scrambling route adjacent to Amen. 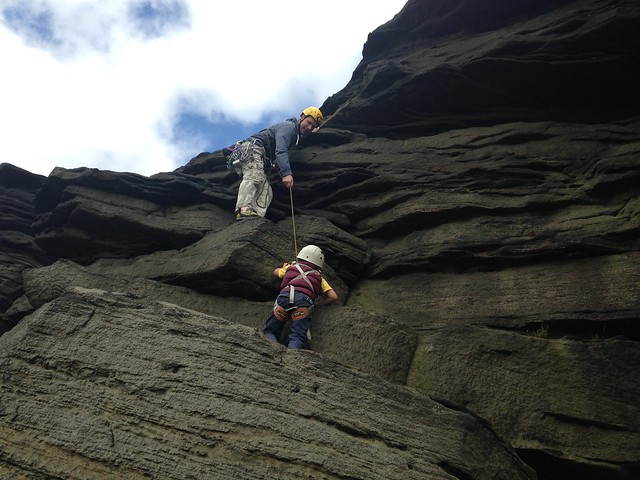 Jess and Owen were climbing on the HVS that runs over the impressive arch of rock, and so Kevin, Steve and I headed over to Pilot Crack next to it, a severe which started with a relatively easy set of steps onto the platform which runs under the arch of a pillar of rock, (to the right of the photo of Jess climbing). 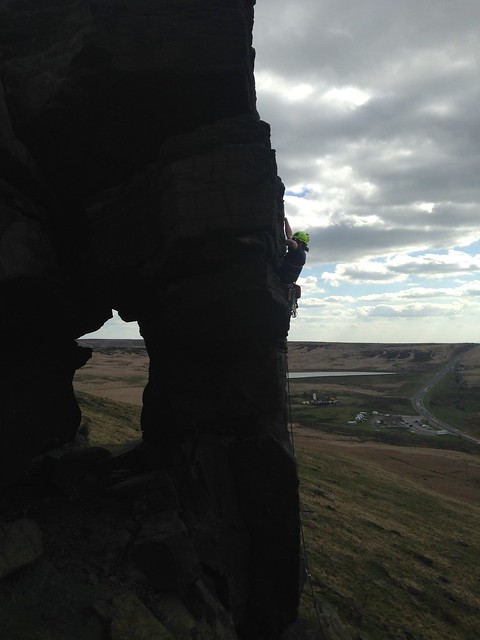 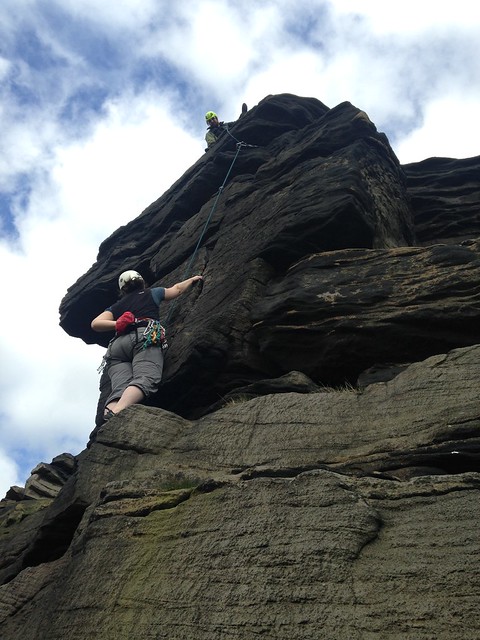 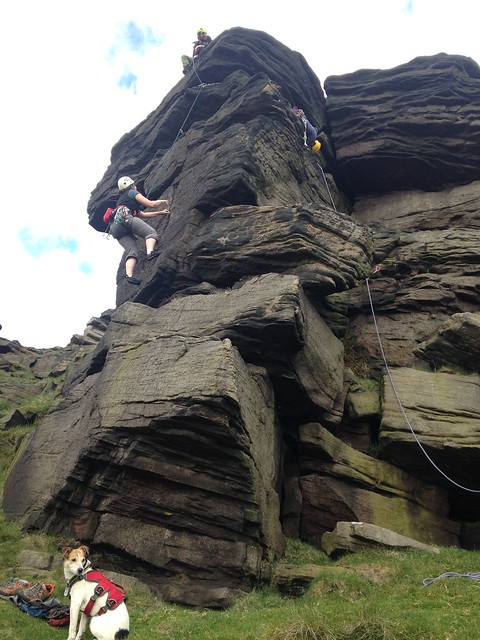 Unfortunately I’d realised at this point I could bail out as I could walk off under the arch, so when I felt off balance doing the last bit I gave up too easily. Followed by the comment from William that I was a scaredy-cat!

So I’ve found my Achilles heel in trad climbing – if I can bail out for an easy option, I will.

So the only solution is to multi pitch so I can’t bottle it and bail out. Better than that, to head out with a club of amazing and supportive climbers who won’t let my over rationalising take over, encouraging me to bail out.

So I head out Wednesday evening with the Karabiner Mountaineering Club to Alderman Rocks near Dovestones Reservoir. High up on the hillside, Alderman Rocks are an amazing outcrop of gritstone which has an amazing view across the Chew valley.

Despite my protests of wanting to start on an easy climb Andy had me heading up Pigmy Wall a severe, and whilst it tested my nerve due to the lack of handholds it was a nice short route for the start to the evening. We finished the route by climbing the last pitch of Rib and Face (a nice VDiff), here climbed by Giry who went before me. 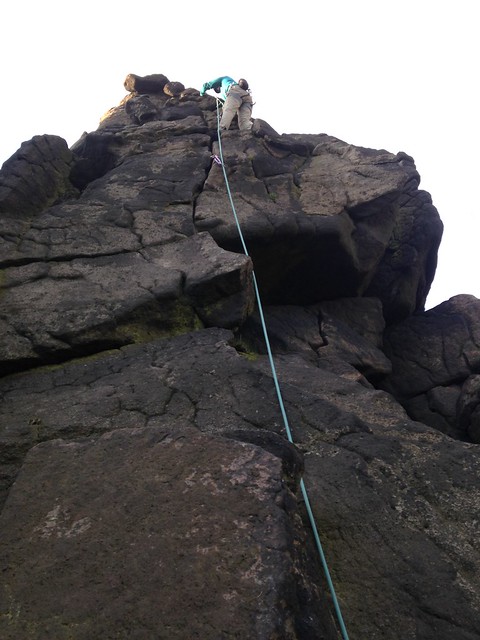 It was the third climb up Great Slab Arete (severe) when I truly questioned myself. A third of the way up the first pitch I couldn’t see the foothold round the other side of the Arete and so I did have a moment of panic. Thankfully I made it and managed to smear and haul myself up the rest of the route without too much swearing.

The final climb of the night was Great Slab (VS 4c), by then I was feeling a bit more confident and also happy to admit defeat since I assumed it was above my grade. Despite the tiny holds for feet and hands I did manage to get myself up it without too much swearing. Just look at the view Andy had from his belay spot! 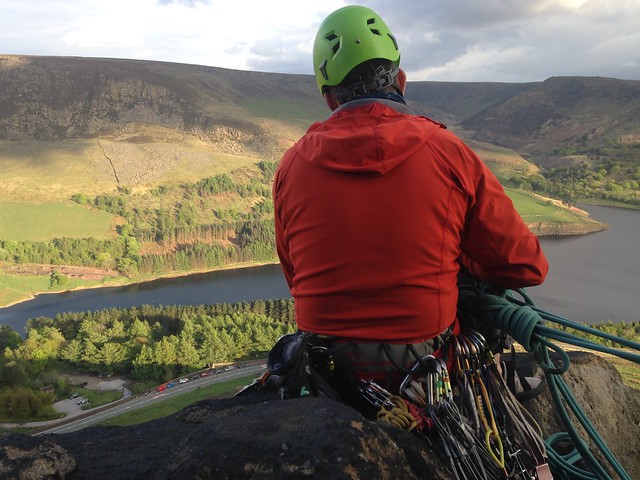 I’m guessing I have a lot to thank gritstone for, expect perhaps the grazes on my hands!