What happened instead proved to me that mountaineering is relentlessly punishing and that the desire to climb mountains is sometimes something that is only enjoyed in retrospect.

Ancohuma at 6430m was our first objective, and we climbed to its base camp at 5100m in 5 days. Nestled in the Cordillera Real mountain range Ancohoma is about 4 hours north of La Paz and a half hour drive from the nearest town of Sorata to the start of the trail. 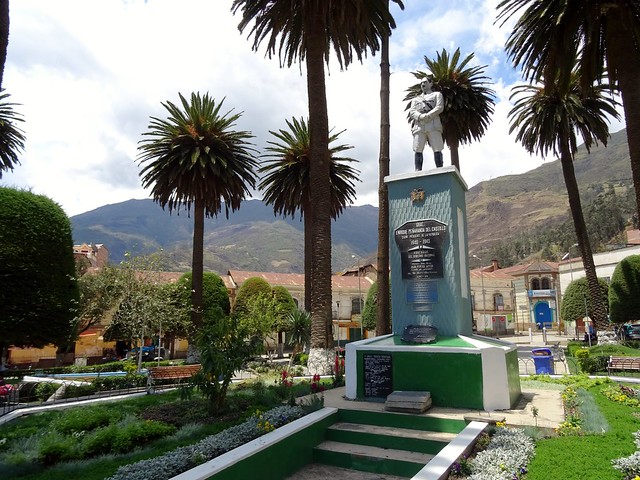 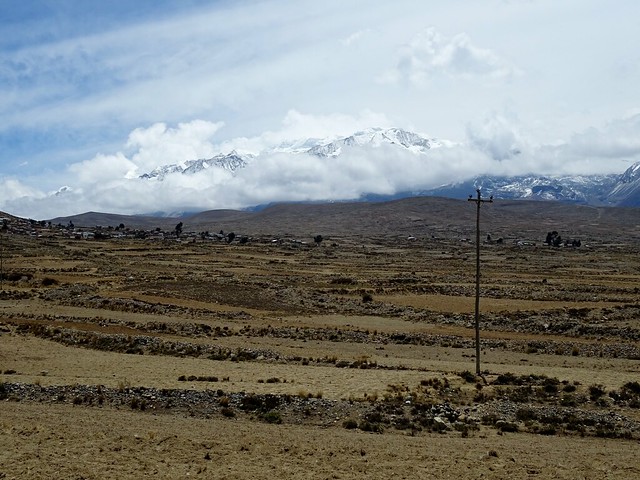 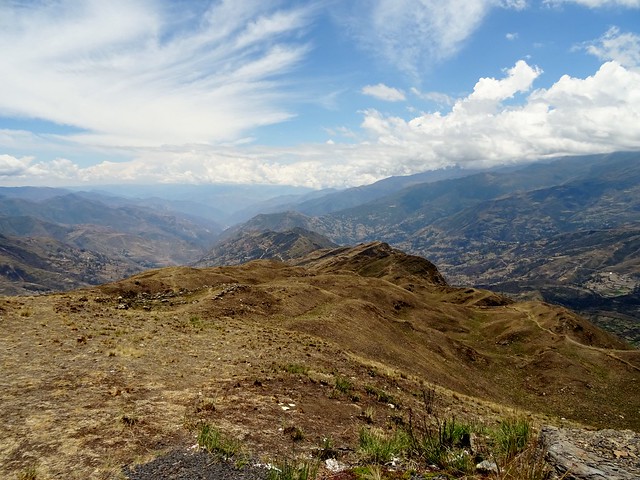 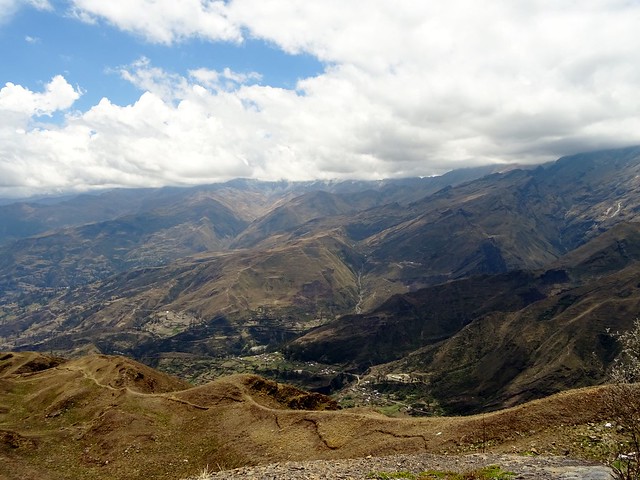 The landscape is amazing and once away from the outskirts of La Paz the country is beautifully empty. The valley around Sorata is terraced with farms providing hints of green in the otherwise brown and barren landscape.

We set off from a small farm high in the mountains above Sorata at 3200m and after a night camping we headed up to Laguna Chijillata at 4200m. 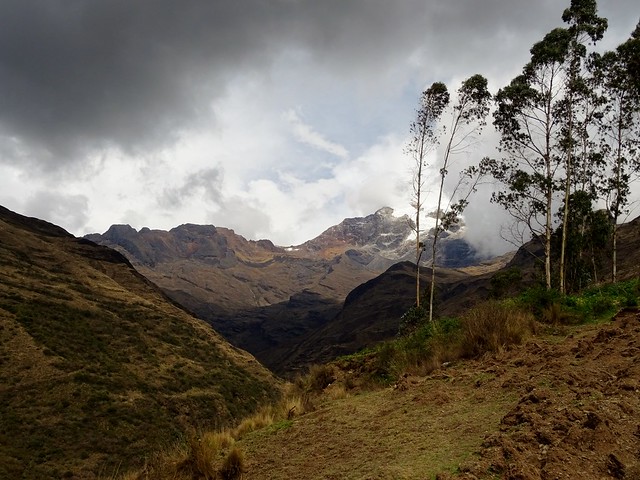 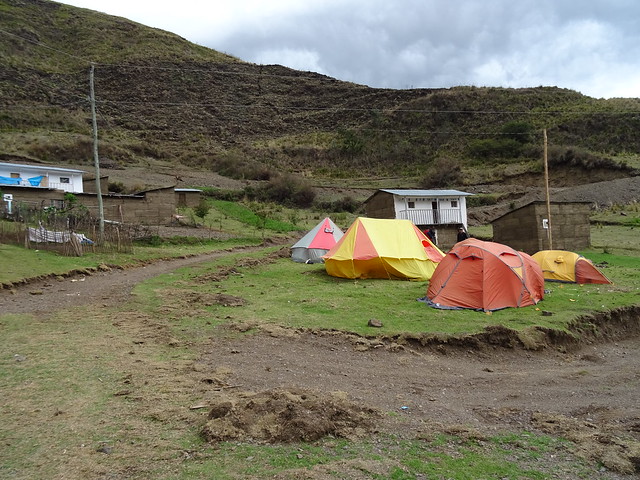 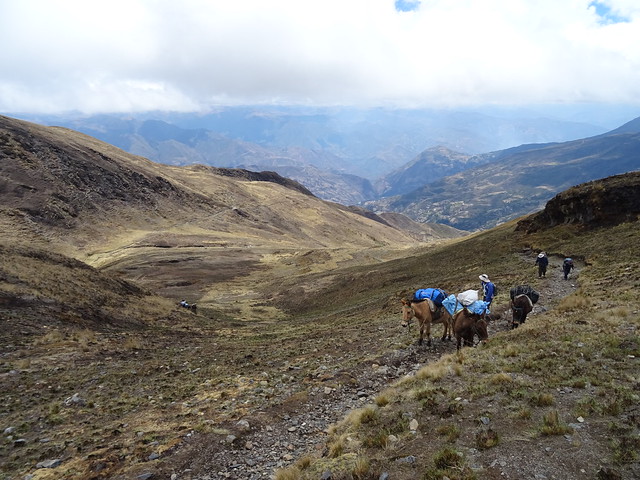 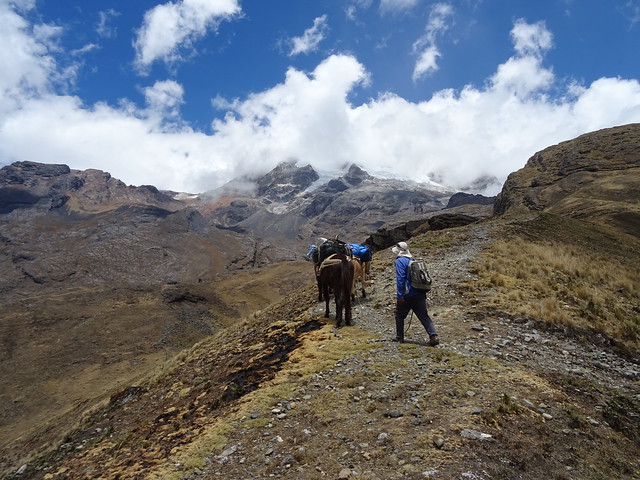 Laguna Chijillata, whilst high at 4200m it is still grazing land for Alpaca and en route to an active mine used by local communities.

It is nevertheless still an impressive landscape. 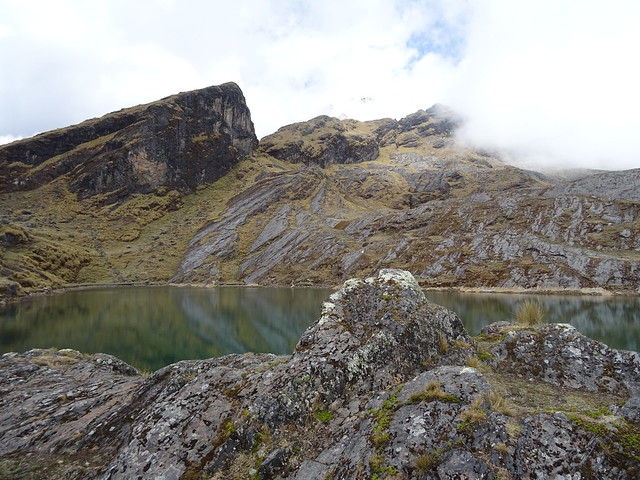 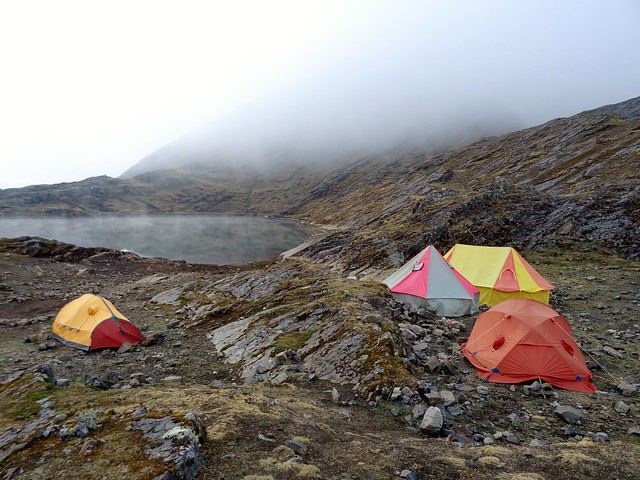 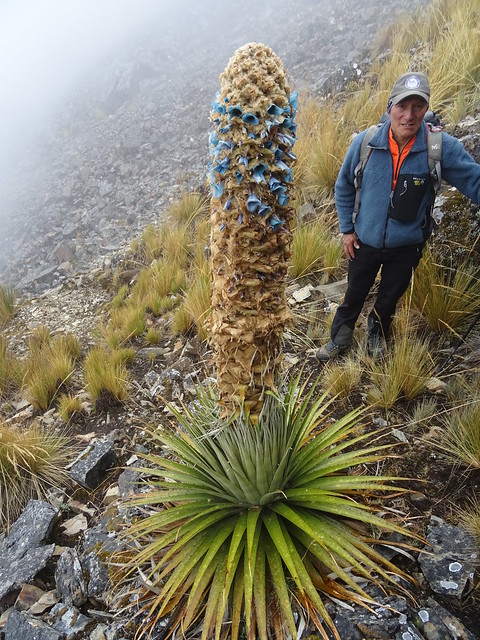 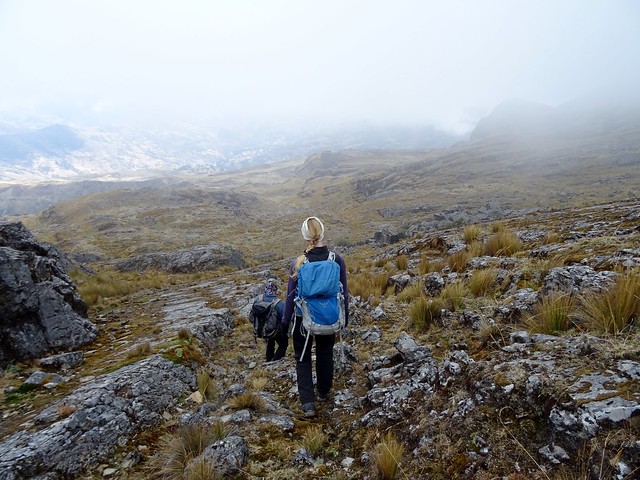 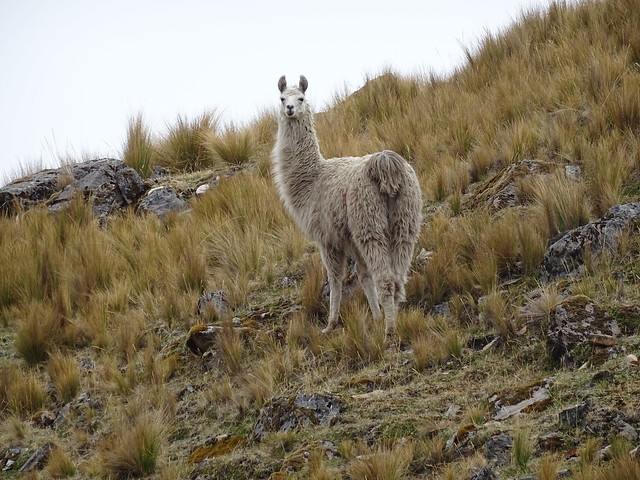 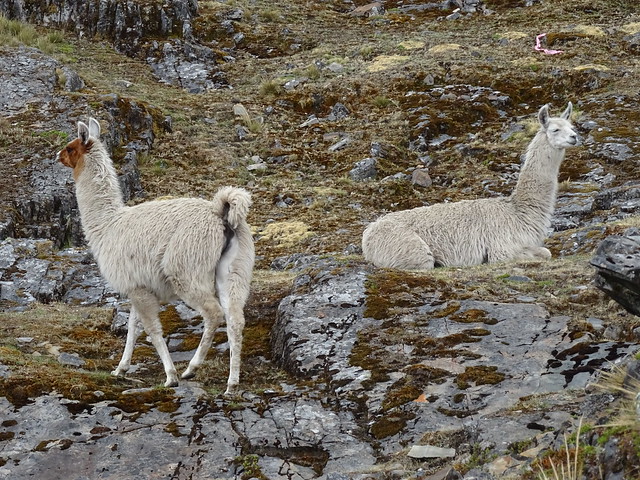 It was from Laguna Chijillata that we saw our first view of Ancohuma summit. 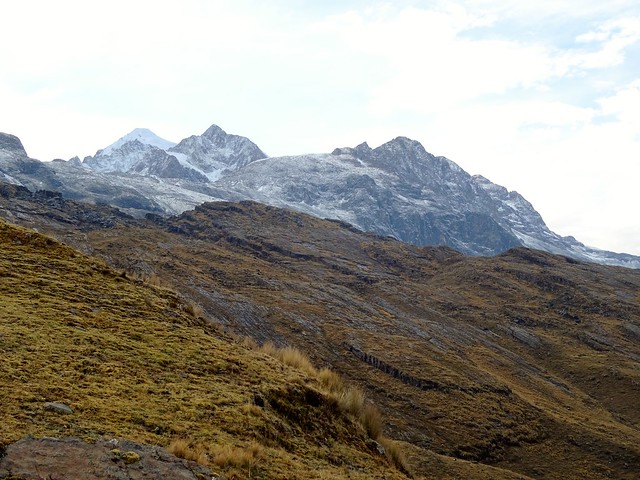 After an acclimatisation day we headed to Laguna Glacier which is Ancohuma’s base camp, at 5100m. The route becomes more rocky close the glacier and in the glaring sunshine it was hard work ascending to that altitude. 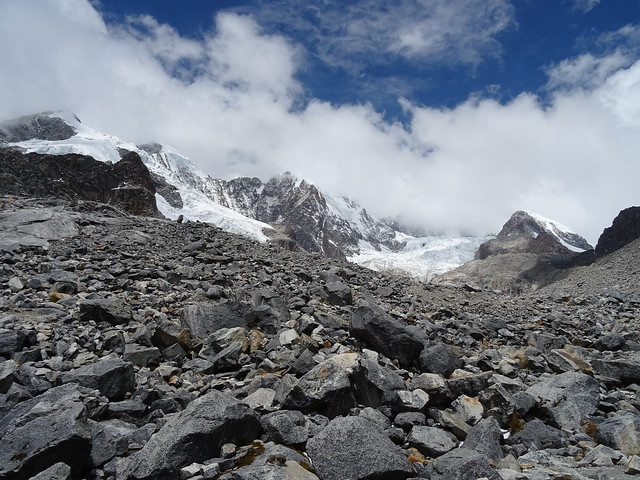 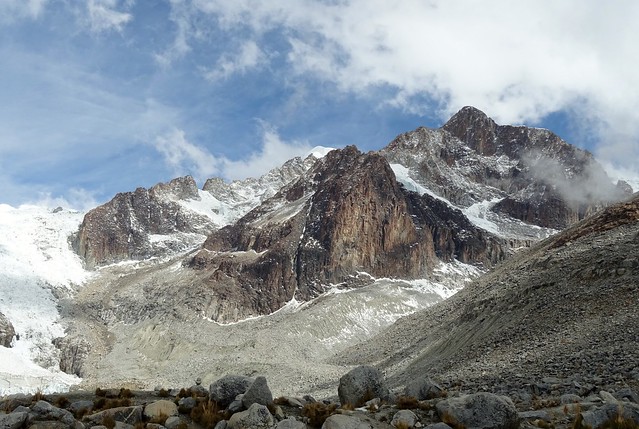 Unfortunately for me whilst we did have an acclimatisation day at Laguna Glacier, I spent the whole time sick, and it would have been foolish to try to summit. I hadn’t eaten a thing for two days, couldn’t keep anything in me and hadn’t slept a wink. When I found myself running out of the tent numerous times in the night, (including one time when I only just got my head through the zip in time), it was clear I was struggling with the altitude. I felt sorry for Paula who was sharing a tent with me.

When I’m staring at the roof of the tent wide awake and thinking about all the things I could be doing instead of being awake because my brain says its not getting enough oxygen, I had to consider my options.

It was a hard decision, having made it to that point, but I decided to turn around and not go for the summit. I doubted if I had the energy left in me having not eaten for days, I felt drained and weak and tired from lack of sleep. I was totally disappointed. I felt like a massive failure. I still do.

Though I didn’t know it then, the group would also fail to summit due to the weather on summit night. But that doesn’t reduce the feeling that I failed in my goal, and that I felt any longer term dreams of mountaineering I have might be over.

While I felt like a total failure as I got the bus out of the tiny town of Sorata for the 4 hour trip back to La Paz, I don’t regret my decision to bail out. I felt broken as we trekked back down the mountain, every effort to put one foot in front of the other was exhausting. I knew I wouldn’t have made the summit when the walk out was a massive effort.

Knowing when to turn around is important. I would have jeopardised my own health and the summit success of the rest of the group had I attempted to continue.

So what went wrong and what did I learn?

1. Water – the water around Ancohuma was high in minerals and having found myself struggling to digest food with such rapid ascent at altitude, even the water became a struggled to keep in me. At high altitude I needed to be drinking over 4 litres a day and I wasn’t even managing one. This reduced my ability to acclimatise.

2. Nutrition – I’ve lost my appetite at altitude before but not so low. There was still two days and over 1400m of ascent left. In retrospect I also don’t think I was eating enough calories from the start which is something I need to ensure in the future. As a vegetarian I was getting fed and then food was having meat added so the meat eaters were always getting seconds. This would have been useful at lower altitudes to build my calorie intake. I don’t like taking supplements but in future its something I’ll seriously consider to ensure I’m not depleting my reserves too early. The food wasn’t highly calorific anyway.

I chose Bolivia as it sounded impressive to bag three peaks and already start so high, but flying into 4000m and not having a week to acclimatise is a massive mistake. It wasn’t until well into my second week in La Paz that I started to feel better. I’d spent my first week being too active so when it came to the mountaineering I started to suffer with the effects of altitude much earlier than I would usually and much more severely. I’ve only had minor headaches in the past.

4. Choose trips carefully – harder isn’t always better, especially high up. I thought that as I’d almost summited Mera Peak if not for the weather, why not try something more difficult. Apart from the altitude Mera was technically easy. There’s a crucial bit in that. APART FROM. Altitude is never easy and just because something is high it doesn’t have to be hard. High IS hard!!

5. Research – October is the start of the wet season in Bolivia, something that I hadn’t considered and was ultimately the reason the rest of the group failed to summit Ancohuma.

I also didn’t research acclimatisation along the route to make my own mind up as to whether I felt it achievable. I trusted the company to be right – but their altitudes for locations along the route were wrong, leaving height gain per day to be more than I expected. This was fine for the rest of the group, but not for me.

Would I do it again?

My inability to put my head down and bear and grin it in this instance just to bag the summit makes me feel I’m not a mountaineer. I don’t get summit fever.I didn’t struggle with the decision to leave – but then I almost had to crawl out of base camp.

I’ve also questioned climbing high mountains with huge walk-ins. Ancohuma had a 5 day walk in for one day on the glacier. Mera Peak in Nepal had a 10 day walk in for 3 days on a glacier. Where’s the fun in that? The whole point of me wanting to mountaineer is because I crave being on the snow and not because I want to do days of trekking.

I’ve realised I’d rather do lower stuff to enjoy the snow and ice – if I want to do long treks there’s plenty of long trails of interest that don’t have to ruin my body.

With a week behind me since coming home from Bolivia, would I do it again?

No, not that trip.

Life is to short to do the same thing more than once, the world is too big.

Would I attempt to go high again?…. the rational part of me says no. But then decisions to climb mountains aren’t always rational. So who knows.

2 Replies to “On not summiting Ancohuma, Bolivia”